Compelling Signs the Chinese Property Boom Is Over

BEIJINGFor years, China "bears"a group of Cassandras ranging from hedge-fund managers to media punditshave been predicting a crash in China's residential real-estate market, the single-most-important driver of the Chinese economy.

We aren't there yet; many economists think an outright collapse is unlikely. But there are plenty of signs that one of the greatest real-estate booms in history is winding down.

Like all booms, this one is ending in a bout of crazy excess. The evidence is apparent in the massive overbuilding that strikes visitors to almost any Chinese city. In the northern industrial city of Harbin, for instance, "ghost suburbs"entire communities of unoccupied high riseshaunt the view on the way into town from the airport.

These empty blocks have acted as warehouses for the exploding wealth of China's middle classes, which have few other options to invest their money. And for more than a decade, real estate has been a good bet. In megacities like Shanghai and Beijing, property values rose up as much as fivefold from 2002 to 2012. 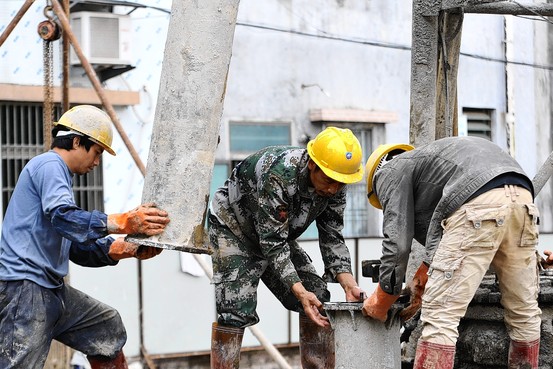 Chinese migrant workers labored at the construction site of a real-estate project in Qionghai city in February. Zuma Press

Now, though, some of these bets are souring. In January, monthly price gains on new homes compared with a year earlier slowed for the first time in a year across the country; sales volumes are also shriveling. In Hangzhou, an eastern metropolis where lakes and cool breezes attract buyers from all over the region, several real-estate developers have cut prices on their luxury developments.

And on Tuesday, it emerged that Zhejiang Xingrun Real Estate Co., a property developer based in a small city south of Shanghai, is unable to repay almost $400 million of bank loans.

These are merely the first signs of much deeper trouble to come. Fundamental trends are at work that, as they play out, will at a minimum upend popular assumptions that real-estate prices can go only up and up. Instead they could start destroying household wealth, with huge implications for the Chinese economy.

Consider: Property accounts for 16% of China's gross domestic product. But even that figure understates its importance. Throw in associated industries like furniture and home appliances, and the number swells. Because new homes are usually built in suburbs that are off the public transport grid, there is an almost perfect 1:1 correlation between the purchase of a new home and a car.

Perhaps the most important trend to watch is the shifting role of local governments, which have been the great enablers of the boom in the market for private homes. Particularly in the past few years, in the aftermath of the 2008 global financial crisis when China's exports tanked, local governments used real-estate construction to prop up growth and cover their budget shortfalls.

Land sales became a vital source of their revenues: The higher the price, the more money they had to spend on everything from schooling to health care. A tight triumvirate of local officials, real-estate developers and bankers managed to keep the real-estate frenzy going.

Land at wildly inflated values, moreover, became the collateral for an epic borrowing binge by local governments, which lavished money on vanity projects, like civic centers modeled on the Palace of Versailles.

The actions being taken by authorities in Beijing to rein in this kind of extravagance will, inevitably, crimp real estate. The central government plans to take a bigger role in the financing of local spending as part of far-reaching fiscal reforms that will alter the calculus for the land market.

As Beijing squeezes credit, interest rates will rise. That means real-estate developers will pay more for loansand many more small and midsize developers will likely go under. Mortgage rates for consumers are set to rise.

The richer Chinesethose who haven't mortgaged their family futures in doomed developments like the ones in Harbinare taking their savings offshore to more reliable real-estate hideaways in Sydney, Vancouver, New York and London. Bordeaux vineyards are popular, too.

At home, meanwhile, the worry is that the beginning of the end of the real-estate bonanza will help to drag down consumptionthe very opposite of what the government intends as it looks to household spending to pick up the slack from a slowdown in exports and investment. That makes Premier Li Keqiang's task of holding up flagging growth (his target this year is "around 7.5%") look harder by the day.

There is evidence that the knock-on effect on consumption is already happening. A good place to observe the phenomenon is Easyhome, a gigantic Beijing emporium covering several city blocks that sells home fixtures and furnishings.

On Sunday, a six-story mall there that offers superluxury itemsArclinea kitchens from Italy at $350,000 apiece; Aston Martin leather desks at $85,000 a popwas deserted. Given the price tags, these stores are rarely crowded. But there were only a few takers at a sprawling shopping mall next door for more modestly priced items like Toto faucets and Villeroy & Boch bathtubs.

True, the spring season is slow in the Chinese property businessthough usually not anywhere near this sluggish.

Write to Andrew Browne at andrew.browne@wsj.com