As the French government strives to prevent people from being priced out of properties in its iconic capital, can London take inspiration from any of its policies? Carl Brown finds out

The mayor of Paris believes everybody has a right to beauty and to live in a nice environment and it is not only money that should determine who lives where, says Frédérique Lahaye, director of housing at the Conseil de Paris, the citys council.

Beauty is certainly a word many associate with Paris. The tree-lined boulevards of the 16th arrondissement and Gothic architecture are famous worldwide.

However in recent years there has been growing concern that this very attractiveness is leading to many people being priced out of Frances capital. Both the central government and the Socialist mayor of Paris, Bertrand Delanoë, have sought to intervene repeatedly in recent years to try to arrest this phenomenon of gentrification.

This long-term trend means large parts of central Paris have become unaffordable to those on lower and middle incomes. The situation came to a head last year when the Socialist-led French government announced a policy of rent controls in order to create more mixed communities.

These measures were adopted by the National Assembly (the lower chamber of the French parliament) on 17 September. The precise details are subject to change, with final measures expected to be published early next year, but changes are likely to involve rent increases being capped at a percentage above a median rent in given geographical areas.

So how did Paris reach this state? Will rent controls work? And, more importantly, what lessons does the Parisian experience hold for its UK counterpart?

As the French capital prepares for rent controls and continues its policy of high levels of subsidy for social housing, in London the picture is the exact opposite.

Rents in London continue to increase, while living costs are soaring, and there is a shortage of genuinely affordable housing. London Councils research, published in September, shows that 526,000 new homes need to be built by 2021 - but just 250,000 are expected to be developed. Simultaneously welfare cuts are leading to fears of, to use London mayor Boris Johnsons own words, Kosovo-style social cleansing, as people are forced to live in less expensive areas outside the city.

Yet Mr Johnson is pushing an affordable rent model which charges rents at up to 80 per cent of market rates. On top of this, housing benefit for private rented sector tenants and total benefits are now capped regardless of income or circumstances.

Paris and London are heading down very different paths when it comes to rent control, social rent and welfare. Inside Housing travelled across the channel to find out more about the Parisian way of tackling a housing crisis.

Wealth split
Paris, like many European cities, has always had an east-west wealth divide, with the western part richer than the east. In recent years a boom in tourism has pushed up prices leading to the displacement of working people from the central districts into the north east of the city and then into the banlieues, or suburbs. Census figures show this phenomenon clearly. In 1981 swathes of central Paris had between 40 and 100 per cent of households defined as working class - by 1999, the proportion for these same areas had fallen to less than 40 per cent.

You still have many poorer people who can access social housing, but the difference is with the middle class - those that are working, but are on a low income, explains Florent Geugen, executive director of umbrella homelessness organisation FNARS.

The immediate area around FNARS office in the 10th arrondissement, near Gare du Nord station, is a prime example, says another FNARS employee. A few years ago the area was poorer and had a reputation for being plagued with criminals and prostitutes. Since then, parts of the arrondissement have become gentrified, and are now home to trendy bars and restaurants offering cuisine from all over the world.

There is little doubt that those on middle incomes now find it hard to live in central Paris, but what about Mr Geugens claim that many of the poor continue to live there because of sub-market social housing rents?

On the face of it, Mr Geugens claim is right. France has a law meaning that 20 per cent of all homes in the city have to be available for social rent - and president François Hollandes government is increasing this to 25 per cent by 2025. By Ms Lahayes own admission, Paris is currently just shy of the 20 per cent target, with around 18 per cent of its 2.2 million households offered as social housing - although it expects to have hit the 20 per cent target by 2015.

Building ambitions
The city is building around 6,000 homes for social rent per year. Social rent is between 6 and 12 (£5 and £10) per square metre per month, which equates to around 30 to 50 per cent of market rent on average. A total of 464 million, or £387 million, was allocated to build social housing in 2013.

In addition to the 20 per cent rule, non-agricultural private employers in France are required to pay a levy equivalent to 0.45 per cent of their payroll towards housing costs. This money is used to help people meet their living costs or to support the construction of social or intermediate housing. The Conseil de Paris has a rule that 45 per cent of social homes are family-sized (three bedrooms or more) and has a 50 per cent social housing target for schemes in designated development zones around the city. The city also has the first option to buy buildings when they are put up for sale and purchased 29 buildings for residential use in 2011. 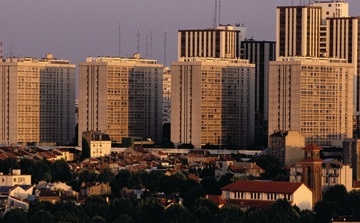 The 19th arrondissement which, at 36.6 per cent, has the highest proportion of social homes in Paris

The citys government therefore intervenes to try to ensure social housing is provided across Paris. However, this does not mean it is successful in ensuring large numbers of poorer people can live in the richest districts. Ms Lahaye, speaking to Inside Housing in Paris City Hall, says around 50 per cent of social tenants live in three eastern districts of the city, an imbalance due to the result of history.

In the richer parts we have the phenomenon of nimby, says Mr Geugen. In the 16th arrondissement, when you have a project to build social housing it takes three years - longer than any other district - because of neighbours attacking the project.

The east-west divide
Figures produced by government agency DRIHL de Paris show a wide disparity in the proportion of homes which are for social rent in the west compared to the east.

To combat this, the city is providing higher subsidies in expensive areas. It has also since 2010 identified 1,030 uninhabited homes for use as social housing in its bid to hit the 20 per cent target. Of these, 377 were purchased by the city. All of this, Ms Lahaye says, is part of an attempt over the past 10 years to placate the trend towards gentrification.

But is Paris providing enough social homes to satisfy demand? The city currently has around 139,000 people on its waiting list and houses around 12,000 people a year. Interestingly, Ms Lahaye says the city is looking at the English-style system of choice-based lettings, to allow people more say over where they live.

Freedom of movement
One system Paris will certainly not adopt is London boroughs practice of housing some people in other parts of the country. The freedom of movement is a constitutional right in France, we cannot compel people to go and live far away out of Paris, says Ms Lahaye. In fact, as many London boroughs restrict their waiting lists to people with a local connection, Paris is doing no such thing. Ms Lahaye says: People dont have to prove there is a relationship, or a special link with the city to be entitled to live in Paris.

Paris has also avoided the London trap of higher affordable rents and strict across-the-board benefit caps regardless of circumstance. Higher subsidies allow Paris to charge lower social rents. The average capital subsidy for a family-sized home in Paris in 2012 was around £50,000, while the average in the affordable homes programme in London for 2011/15 was just £28,716.

Benefits in Paris are means-tested and are set up in a way that every claimant has to find something towards their rent, how much depends on their level of income.

What is clear is that the centralised drive to ensure social housing is built in one of the richest cities in the world has only been partially successful in preventing the gentrification of Paris. By far the bigger problem is the issue of spiralling house prices and private rents.

The French government is now considering bringing in a system whereby landlords can only charge 20 per cent higher or lower than the median in a particular reference area. The definition of these reference areas has yet to be decided and there are concerns there could be anomalies if the reference areas are too large. Nevertheless, the policy is supported by FNARS and mayor Delanoë, who has repeatedly warned that Paris risks becoming like Venice in Italy - a tourist mecca, but devoid of inhabitants.

But Ms Lahaye rejects Mr Johnsons argument, saying landlords invest for the increased asset value of the property, not for the rental income. There is no connection between the price of real estate and the level of rent, she states.