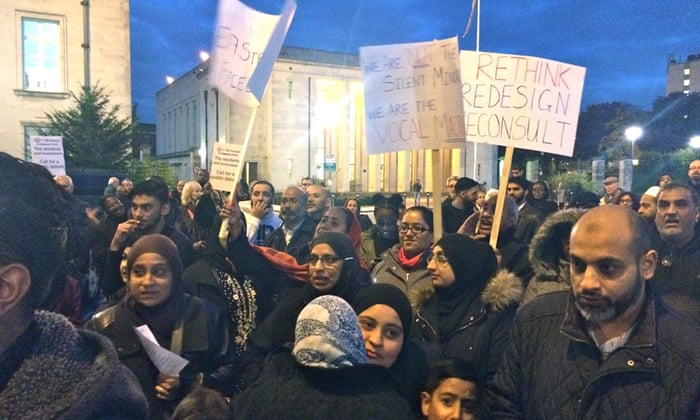 It was a lively scene outside Walthamstow Town Hall: hundreds of people, young and old, female and male of many faiths and ethnicities united in advance of a full council meeting against what they see as the heedless imposition of one of Boris Johnsons mini-Holland cycling infrastructure schemes. Lets have justice not a dictatorship, read one placard. We are not the silent minority, we are the vocal majority, a banner cried.

This is not how things were meant to be. When the Labour-run borough secured full mini-Holland status and £30m from Conservative-run City Hall in March 2014, Johnson declared himself incredibly impressed by the thirst of all the leading borough funding bidders to transform themselves into better places for people. Clearly, a lot of people who live in Waltham Forest arent seeing the changes in their streets in quite that way.

Their grievances are deep and various. Formally opened in Walthamstow Village two months ago, the Waltham Forest mini-Holland was heralded by the council as improving conditions for people who walk, cycle and drive and for creating new public spaces, providing our community with the perfect place to relax and unwind. Alas, the road closures this has entailed have inflamed rather than soothed at least some of those most affected.

Town Hall protesters, mobilised by campaign group E17 Streets 4 All, complained that delivery vans, visitors, carers and even emergency service vehicles have been unable to gain access and that motorised traffic now clogs neighbouring residential streets - so much for cleaner air and a more tranquil environment, they snorted. They think deputy council leader Clyde Loakes, chief advocate of the scheme, has been far too friendly with the Waltham Forest branch of the London Cycling Campaign.

Local businesses have aligned themselves with unhappy residents, claiming that trade has fallen through the floor. A telling exception, though, are estate agents. They are mentioning mini-Holland funding in their sales pitches to the sort of people who might be in the market for a three-bedroom terrace in Leyton for nearly half a million or a two-bed adjacent to (ahem) Blackhorse Village for £375,000: cafe-dwellers, loft-converters, gentrifiers; the sort of people who ride bicycles.

The furore has also produced some diverting political alignments. While Loakes has been accused of incompetence, arrogance and indifference to the views of most ordinary locals, Conservative opposition members have cutely positioned themselves as champions of the trampled masses.

With most protesters denied access to the council chamber - well, there were an awful lot of them - Conservative group leader Matt Davies proposed a motion, seconded by his Tory colleague John Moss, which noted that the plans that had come forward so far would clearly disadvantage all road users including bus passengers other than the small minority of residents who are cyclists, whom a study [funded] by the Camden NHS and TfL has proven are almost entirely middle-class, young white men. That rings a bell. Have Davies and Moss been reading the Guardian?

Davies had addressed the crowd outside, as had a local Green. Hed stressed that his local party, which is very big on cycling, had yet to finalise its stance towards the mini-Holland, but he expressed a personal view that it did not meet the requirement for Londons street transport networks to be sensitively integrated.

Two of the boroughs three MPs have intervened as well. Looking on from the north, where Waltham Forest and Essex meet, Chingfords Iain Duncan Smith (very Conservative) has taken a break from his quarrels with the chancellor to challenge the council to rethink and reconsult, claiming, like others, that the public consultation had been flawed.

As for Walthamstows Stella Creasy (Labour), her in-box has been rammed with mini-Holland matters for many months. She reports that the largest volume of correspondence has been concerned about particular details of the scheme, rather than expressing overall support for or it or opposition to it. In a letter to Loakes (and Waltham Forests chief executive Martin Esom) she has urged a promised six-month review to be undertaken.

Following the council meeting protests, Loakes told the Waltham Forest Guardian that he would listen to our residents concerns even more. At this early stage the form that listening will take and any action that ensues remain to be seen, though Loakess tone was more conciliatory than that of Mayor Johnsons media friend and £59,000 a year part-time cycling commissioner Andrew Gilligan when he previously declared that opponents of the Walthamstow Village scheme should be embarrassed.

Initial consternation and traffic chaos are not unusual when new road management arrangements are introduced, whether to facilitate cycling, combat rat-running or anything else. Often, things settle down in time. Cycling activists produce check lists of evidence that cyclised streets are good for local businesses, not bad. That said, those Waltham Forest residents who feel the project has not been properly thought out might sympathise with the view of others across London who say the Johnson Vision for Cycling is being railroaded through in order to give the Conservative mayor something to boast about before he leaves office next May. After all, he wont have a lot else.

Still, if the scene at B&Q on Lea Bridge Road on Friday is anything to go by, the council is plainly seeking to reach out over the next part of its infrastructure programme. I ran up there (yes, ran) from my home across the border in Hackney (for radiator paint, since you ask), and encountered in the car park a mobile promotional kiosk where a trio of young men were handing out leaflets and inviting people to examine plans to upgrade this major east London thoroughfare right through to the Whipps Cross roundabout.

Better footways, bridges and segregated cycle tracks are promised. The kiosk proclaimed that the uplifted Lea Bridge Road will be a street for everyone. It is easy to see how this long, eclectic stretch of High Street could be enhanced, including by making it more hospitable for cycling. But will the changes be perceived as truly for everyone?