New mortgage approvals have been declining since January Getty

The number of new mortgage approvals fell in July, suggesting a post-Brexit vote knock to the housing market.

New figures from the Bank of England this morning show that there were 60,912 approvals for house purchase in July, down sharply from the 64,152 in June.

The figures were also lower than the 61,900 City of London economists had expected.

Approvals have been on a declining trend since the beginning of the year, but the July approvals figure was the lowest since January 2015 and was down 12.4 per cent on the same month a year earlier. 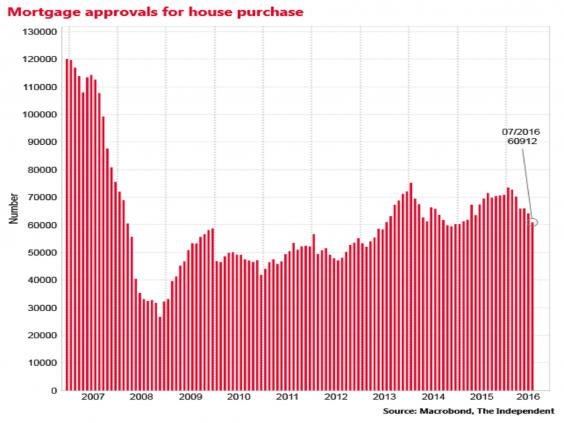 Before the financial crisis of 2007-09 banks were approving more than 100,000 new house purchase mortgages a month.

Julys marked slowdown in mortgage approvals fuels our belief that house prices could ease back by around three per cent over the latter months of 2016 and there could well be a further 5 per cent drop in 2017 said Howard Archer of IHS Global Insight.

6 ways Britain leaving the EU will affect you

But the other major house price indexes since the 23 June vote have shown a mixed picture.

The annual rate of growth of Hometracks index fell from 8.6 per cent to 8.1 per cent in July.

But Halifaxs remained steady at 8.4 per cent, while Nationwides strengthened slightly to 5.2 per cent. 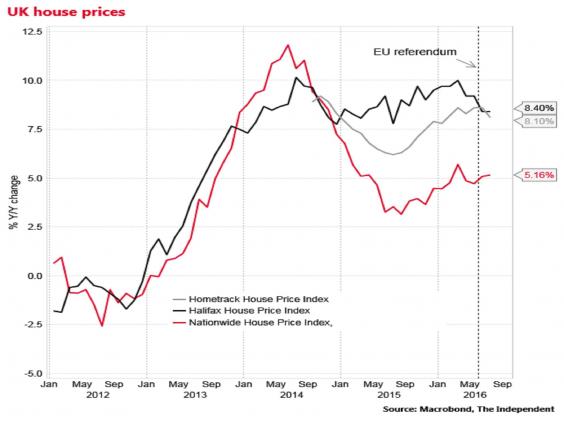 An analysis by the Treasury before the referendum suggested house prices could fall by between 10 per cent and 18 per cent in the event of a Brexit vote by 2018.