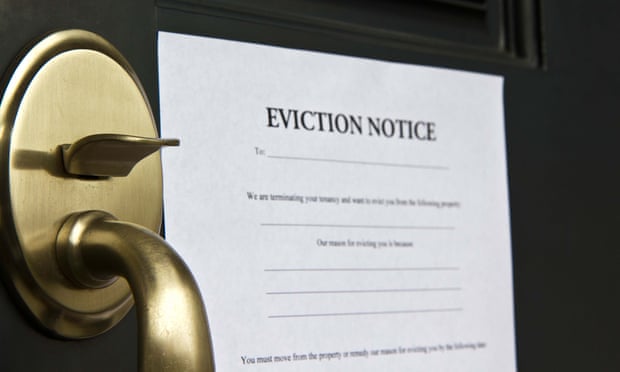 An eviction notice on a front door. Photograph: Thomas Baker/Alamy

Record numbers of families are becoming homeless after being evicted by private landlords and finding themselves unable to afford a suitable alternative place to live, government figures show.

The end of an assured shorthold tenancy (AST) was cited by nearly a third of the 15,170 households in England who were classed as homeless in the three months to June  a number that was up 10% on the same period last year.

The problem was particularly acute in London, accounting for 41% of all homelessness acceptances in the capital during the period, according to figures from the Department for Communities and Local Government (DCLG).

Why the occupation of this empty building highlights the housing crisis

Frank Freeman
This is the former HQ of property management company Camelot, which provides guardians to stop squatting  while we are desperate for social housing
Read more

The end of an AST has rapidly become the single biggest cause of homelessness in recent years, triggered by spiralling rent rises and cuts to housing benefit support. In 2010 just 11% of homeless acceptances in England were caused by the end of an AST.

The governments statistical release states: Affordability [of housing] is an increasingly significant issue, as more households facing the end of a private tenancy are unable to find an alternative without assistance.

Bob Blackman, a Tory backbencher who has drawn up a private members bill seeking to require councils to do more to help households at risk of losing their homes, said: It is a national disgrace when we have the highest number of people in employment ever, we have a low rate of unemployment, that we still have people sleeping rough. Goodness knows what will happen if there is a recession.

He said the government was very sympathetic towards his bill, which will have its second reading in the Commons at the end of October, and he was negotiating with ministers to get proper support. I think it sits with Theresa Mays social agenda so that everyone benefits from the economic situation of the country, which is very positive, he said.

The quarterly statistics also reveal a sharp rise in the number of homeless households with children who had been unlawfully resident in unsuitable temporary bed and breakfast accommodation for longer than six weeks.

Although councils are required to ensure families do not stay in B&B accommodation for longer than 42 days, 1,140 households found themselves in this position in the three months to June, up 29% on the same period in 2015 and the highest recorded number since 2003.

Outer London boroughs in London such as Croydon (169), Redbridge (132) and Harrow (120) recorded the highest number of households in breach of the six-week limit, and there are signs the phenomenon is spreading beyond the capital, to places such as Luton (87), Reading (65) and Peterborough (30).

Local authorities have blamed use of B&Bs on chronic shortages of affordable suitable temporary housing in their areas, a shortage caused in part by government cuts to housing benefit levels.

The figures show that 73,120 households were in temporary accommodation, up 9% on a year earlier, and nearly three-quarters (52,820) were in London.

The homelessness charity Crisis called on MPs to support Blackmans bill, which has cross-party support. Its chief executive, Jon Sparkes, said: It isnt enough to help people at crisis point. We need to prevent them from losing their home in the first place.

We need a change in the law to prevent more people from losing their home and to make sure all homeless people can get the help they need, while councils need the funding to make this work. Prevention has already been shown to work in Wales, where it has dramatically reduced the need for people to be rehoused.

Martin Tett, the housing spokesman for the Local Government Association, said: Councils want to help everyone at risk of homelessness and support those who are homeless into accommodation as soon as possible. Faced with significant cuts to their budgets, falling social housing availability and welfare reforms, it is clear councils cannot tackle this challenge alone.

Campbell Robb, chief executive of the housing charity Shelter, said: These figures are a heartbreaking reminder of the devastating impact our drastic shortage of affordable homes is having. Every day at Shelter we hear from families struggling to keep their heads above water when faced with the double blow of welfare cuts and expensive, unstable private renting, with far too many ultimately losing the battle to stay in their home.

A DCLG spokesman said: This government is committed to supporting the most vulnerable in our society and ensuring our country works for everyone, not just the privileged few.

Statutory homelessness remains less than half the 2003-04 peak and we are investing over £500m to both tackle homelessness and prevent it happening in the first place.