House prices will stagnate in 2019 as sales fall, Rics says

House prices will stagnate in 2019 and the number of sales fall as a mixture of Brexit and affordability constraints takes its toll on the property market, according to Britains surveyors and valuers.

The Royal Institution of Chartered Surveyors (Rics) said it expected the number of house sales to fall back by 5% to around 1.15m compared with 2018. The number of sales will remain sharply below the 1.7m that changed hands in the peak year of 2006.

Prices will come to a standstill nationally, said Rics, although in London and the south-east they are likely to pull back slightly. It expects prices to be neutral in East Anglia and the south-west, but for there to be solid momentum behind price rises in Northern Ireland, the north-west, Scotland and Wales.

Brexit uncertainty is a significant factor, said the surveyors body, but the key issue was that the ceiling for affordability has been reached in much of the south.

House prices are now a greater multiple of earnings than at any point since records began, said Rics. Such high house prices are shutting more and more people from accessing the market.

Its forecast tallies with that of the property website Rightmove, which reckons the inflation rate for the average asking price of a property will fall to 0% in the UK next year, with prices in the south-east commuter belt dropping by 2%.

But Rics said Bank of England projections of a 30% fall in house prices following a disorderly Brexit  driven by a rise in interest rates  were implausible. Some of the assumptions behind the disorderly Brexit scenario seem implausible to us, it said. Mainly, we would expect the Bank to cut interest rates and potentially restart quantitative easing in the wake of no-deal. 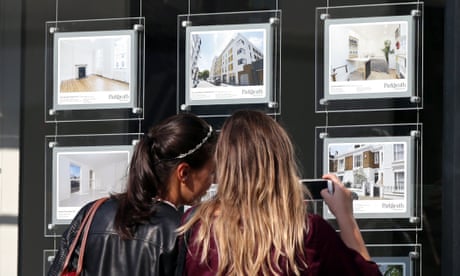 One reason why house prices are unlikely to crash is the continued paucity of supply and few forced sellers. Rics said the government faces a huge task in reaching its 300,000 new homes per year target by 2022. It said 222,000 housing units were added in 2017/18, up 2% from the previous year, but momentum had slowed, with new housing starts starts down 3% year on year in recent months.

Sellers are thin on the ground, limiting choice for buyers and the likelihood of a price crash. It said: Many vendors will be under no real pressure to sell, meaning they can choose to avoid listing their property at a time when the market is weakening.

Rent costs are likely to creep upwards, Rics warned, after a sustained drop in the availability of space to rent. It said its index of landlord instructions coming to the market has been in negative territory for 10 successive quarters, which it describes as the longest stretch of declining in supply in the rental market since the series began in 1999.

It expects a 2% increase in rent costs in London during 2019, but said weak tenant demand was likely to hold back rises elsewhere.