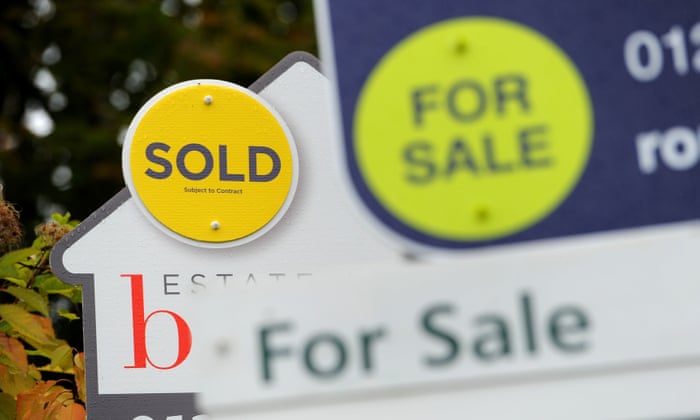 UK house prices appeared to defy the Brexit gloom, with the value of a typical home up by more than £13,000. Photograph: PA


UK house prices have defied the Brexit gloom by racking up their biggest monthly increase since records began in 1983, adding more than £13,000 to the value of a typical home in only 28 days, according to the Halifax.

However, the scale of the reported increase  5.9% in February  confounded many commentators, as it appears to contradict the widely held view that the UKs property market remains in the grip of a slowdown.

Samuel Tombs, chief UK economist at the consultancy Pantheon Macroeconomics, cited the Halifaxs indexs extreme volatility  the record-breaking price rise followed a 3% fall in January  and said: Right now we have little confidence in Halifaxs index as a reliable indicator of the housing market.

However, others said there was evidence of a pre-Brexit bounce: the Mortgage Advice Bureau, a broker firm, said anecdotal reports from across its network suggested that February was one of the busiest for the market that weve seen for some time in most areas of the country.

The Halifax said the 5.9% increase seen in February was thought to be the biggest it had ever recorded. It lifted the average property price to £236,800  up from £223,629 at the end of January. That translates into a £470-a-day increase in value.

However, the lender cautioned against putting too much emphasis on the monthly figure, as that was much more volatile. It pointed out that January was a particularly weak month, so February was something of a correction.

The lender said: Weve been seeing an increase in sales in the south-east, which had been more subdued in recent months. This has played a part in the movement, given the importance of the region.
The big monthly rise lifted the annual rate of price growth to 2.8%, which the Halifax said was fairly subdued compared with 2015-16, when it was more than 8%.

However, Russell Galley, Halifaxs managing director, said: The shortage of houses for sale will certainly be playing a role in supporting prices  The overall resilience of the market is still evident.

The overriding view of many commentators during recent months has been that Brexit uncertainty and a lack of affordability in some areas are continuing to stifle the UK housing market.

Last month, data from the Royal Institution of Chartered Surveyors (Rics) indicated a further weakening of the market, with demand, prices and sales expectations all down. A week ago it emerged that the London estate agent Foxtons had slumped to its first annual loss since its stock market debut, blaming a further fall in the number of homes sold and warning of a prolonged downturn in the capitals property market.

Sign up to the daily Business Today email or follow Guardian Business on Twitter at @BusinessDesk
Lucy Pendleton, a founder director of the estate agent James Pendleton, said: This market is rattling around like a ricocheting bullet. Its an incredibly unusual shift, even for monthly prices, which are known to be more volatile.

Brian Murphy, the head of lending at the Mortgage Advice Bureau, said one reading of the data was that the market had held steady over the past few months in most parts of the UK but with the start of a new year, this had given way to a spike in activity due to the pent-up demand of those who wanted to move but had delayed their plans until more clarity around Brexit was available.

He said: With any direction with regards our imminent departure from the EU still lacking, it would appear some purchasers have gone ahead anyway, supported by a highly competitive borrowing market, hence the growth spurt in the market as reported this morning.

However, Tombs thinks the Halifax indexs extreme volatility, with Februarys gigantic rise following a sizeable fall, undermines its validity. He said: Like others, the index is seasonally adjusted, but it uses an outdated methodology which potentially is contributing to its excessive volatility. All other indicators suggest that house prices essentially are on a flat trend.