Revealed: the fastest double your money years for UK property 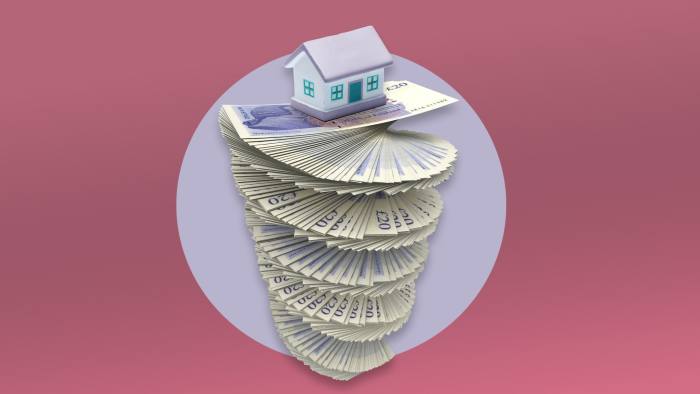 Homeowners whose properties had doubled in value by the end of last year typically had to wait more than 16 years to make these gains  the longest period for this to take place over the past half-century, according to a new study. Analysis of the UK housing market by estate agent Savills found four moments  1974, 1980, 1989 and 2004  when the average UK homeowner could have doubled their money within five years or less. However, current owners or buyers should not get their hopes up  the research shows property prices are unlikely to experience such rampant growth in the near future. House price growth has slackened in recent years in many parts of the country, following the soaraway rises that took hold after the millennium.

Lucian Cook, director of residential research at Savills, said: House price growth has dramatically increased the wealth of homeowning households over the past 50 years, but the rate at which that wealth has been accumulated has slowed since the mid-noughties. The research comes as the Office for Budget Responsibility downgraded its forecasts of UK house price growth for this year and next (see box). The Savills analysis, using Nationwide data, exposes how previous periods of rapid growth in house prices have put a brake on the ambitions of first-time buyers and those looking to move up the ladder. Where in earlier times, buyers might have been able to take a greater risk on a mortgage in order to fund a purchase, the current combination of higher prices and tighter borrowing regulations have curbed their ability to do so. Mr Cook said: If people are going to trade up the ladder, then theyre going to have to work very hard in terms of paying down their mortgage debt to accumulate the level of equity they need. Theyre not going to get the support theyve had historically from house price growth.The year noted in Savills analysis is the moment, on average, when an owner had doubled their money on a property (not the date of purchase), based on nominal prices.

It also looked at the length of time needed to clock up such a gain in real terms. Those who had doubled their money by the end of 2018 would have taken 29 years to do so when accounting for inflation  five years longer than the average for the past 20 years.Of the four moments when owners will have seen the value of their properties double in under five years, the years 1974 and 1980 came in the context of rampant inflation, with retail price inflation reaching 27 per cent in 1975 and 20 per cent in the mid-1980s. In the later period running up to 1989, house prices had seen rapid growth as the home ownership policies championed by then prime minister Margaret Thatcher came to fruition. Typical loan-to-value ratios offered by mortgage lenders rose from 65-75 per cent in the 1970s to close to 90 per cent in the late 1980s. The impact of higher interest rates was mitigated by the Miras scheme introduced in 1983, which gave borrowers tax relief on their mortgage interest. 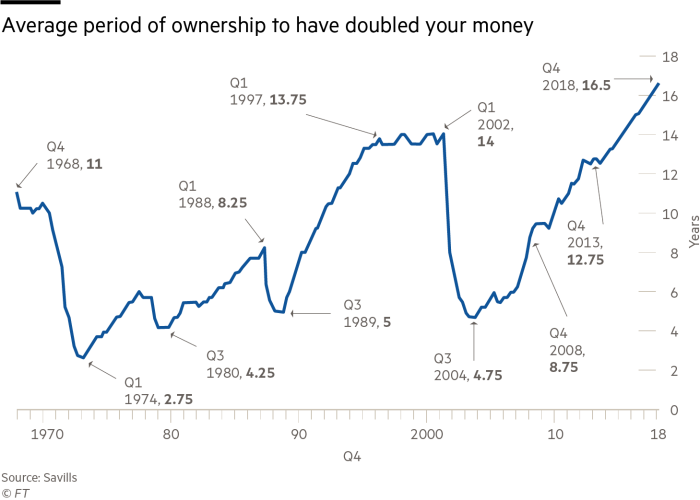 The lending climate continued to loosen into the early years of the millennium, when first-time buyers could borrow 100 per cent or more of the value of their home. Ray Boulger, senior technical manager at mortgage broker John Charcol, said that in the early 2000s, loan-to-value limits on mortgages meant first time buyers had no need to save for a deposit  and the price of high LTV loans was then highly competitive against lower LTV mortgages. The premium you had to pay to get a 100 per cent mortgage wasnt that high, compared with the costs of a 95 per cent mortgage today, he said. The impact of movements in interest rates on borrowers has also changed enormously over the past four decades. Before the 1980s, the majority of borrowers were on variable rate deals  more or less the only type offered by lenders  so they felt the impact of interest rate changes much more rapidly than today.

he effects of a rise in interest rates are now dispersed over a much longer time period, since most borrowers  about 60 per cent of the market  are on fixed-rate mortgages that protect them from interest rate changes for a specified period. Choice was limited in other ways. Mr Boulger recalled buying his first home  a three-bed end-of-terrace house in Dagenham  for £4,650 in 1969 on a variable-rate mortgage at a 90 per cent LTV. Most lenders charged the same interest rate. In most cases you had to save with the building society for a year or two before you got to the front of the queue to get a mortgage.The Savills analysis revealed little regional variation in 2018 in the length of time to double your money in the housing market, with London and Northern Ireland standing out as slightly faster and slower respectively than the rest. Savills said this was because the localised nature of regional house price cycles tended to average out over the 16-year period to 2018: it captured periods when London prices were soaring and those in the north were sluggish, but also periods when the reverse was true. Weaker outlook for house prices, says OBRForecasts of house price growth were cut sharply this week by the Office for Budget Responsibility, which released its latest economic and fiscal outlook after Philip Hammond, the chancellor, delivered his Spring Statement on Wednesday.

In October last year, the OBR had forecast that house prices would rise by 3.2 per cent over 2019. It now forecasts a fall of 0.3 per cent. Its previous forecast for 2020 had prices rising by 3.1 per cent; on Wednesday it revised this down to 2.6 per cent. The OBR said it was prompted to change its forecast by the much weaker outlook for house prices in 2019 and 2020. Over the rest of the forecast period to 2023, it suggested house price growth would return to 4 per cent or higher every year. Beyond the near term, we expect house price inflation to pick up as a result of stronger real household income growth and continued pressure of demand on supply, it said.

However, the OBR also said it had based its forecasts on the assumption that the UK makes an orderly departure from the EU on March 29 into a transition period that lasts to the end of 2020  a sequence of events that has been thrown into doubt by events in Parliament this week. The OBR added it expected property transactions to fall by 5.4 per cent between the end of 2018 and mid-2019. The latest near-term indicators of housing market activity point to a significant weakening, it said.