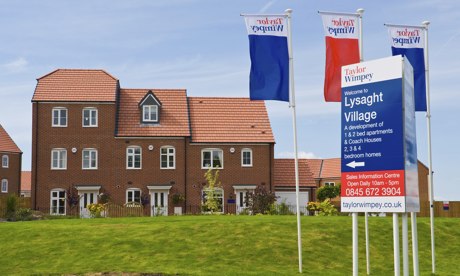 Houses being built by Taylor Wimpey

Loans to first-time buyers have jumped by almost a quarter in a year, adding to concerns that UK house prices risk spiralling out of control.

The Council of Mortgage Lenders reported on Wednesday that first-time buyers took out 27,000 loans in November 2013, 24% higher than the previous November.

A total of 60,000 loans worth £9.4bn were advanced, a slight fall on October, but a 22% year-on-year increase in value and the fourth highest lending rate since before the housing market crash.

The boom in home loans was revealed as the UK's second-largest homebuilder said that its average sale price had broken through the £200,000 barrier in 2013.

Taylor Wimpey said its average sale price was £210,000 in 2013, compared with £197,000 in the previous year, which it attributed to a shift to "better quality" locations and increases in market prices.

Pete Redfern, Taylor Wimpey's chief executive, said there had been "a meaningful step change in market conditions in 2013 after several years of a declining or flat market".

The builder completed 11,700 homes in 2013, 7% more than the previous year, and sold 2,900 homes supported by the government's Help to Buy mortgage-subsidy scheme. Completions and average selling prices are expected to rise further in 2014, the company said.

Announced by the chancellor, George Osborne, in April 2013, the first phase of Help to Buy allows buyers of new-build homes to take out equity loans of up to 20%. The second phase of the scheme, launched in October, part-guarantees mortgages for any property worth up to £600,000.

Howard Archer, chief UK economist at IHS, is forecasting 8% growth in house prices in 2014, with gains across the country. But he warned on Wednesday that this could prove to be a conservative forecast. "There remains a very real danger that house prices could really take off over the coming months, especially if already significantly improving housing market activity and rising buyer interest is lifted appreciably further by the Help to Buy mortgage guarantee scheme which was launched in October."

Mark Harris, chief executive of the mortgage broker SPF Private Clients, said the new year had "got off to an extremely busy start, with the Help to Buy scheme playing a big part in encouraging first-time buyers to get on the housing ladder". He added that pressure to raise interest rates had been relieved, following the unexpected news that inflation had fallen to 2%, the Bank of England's target rate.

"With the consumer prices index falling to the 2% target, any pressure to raise interest rates in the short term has been relieved. Interest rates are not expected to rise this year, which will further fuel confidence among buyers. However, it's important that borrowers plan ahead and budget for when interest rates do rise to ensure they can afford to pay their mortgage."