Where (and why) the super-rich are investing in real estate 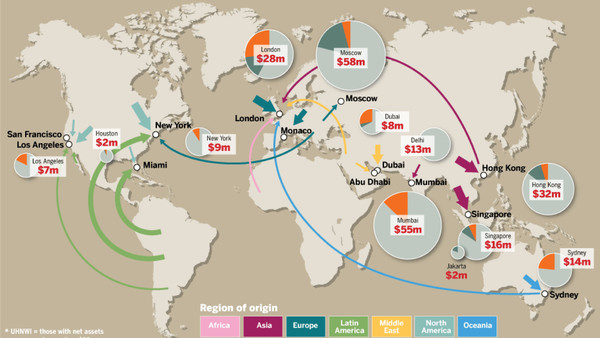 Land ownership is, perhaps, the most ancient expression of wealth. Throughout history it has provoked conflict and inspired grandeur, from civic monuments and sacred spaces to egotistical towers and pleasure palaces. Today the relationship between land  or property  and wealth is more complex and more commercial than ever before. Since the economic crisis of 2008, real estate has attracted many of the worlds super-rich who have sought a safe haven, and a means of diversifying assets, and a very visual symbol of power and sophistication.

In 2008, $146bn of global private wealth was invested in the large-deal (above $10m) real estate market and by 2012 this had increased by 111 per cent to $308bn. Meanwhile, corporate investment in the same sector rose by only 43 per cent to $594bn over the same period. These figures, detailed in a new report by Savills in partnership with Wealth-X, a Singapore-based consultancy, reveal the increasing importance of private investment in the world of property.

Its a case of push and pull factors, says Yolande Barnes, director of residential research at Savills. I just saw a list of the top dealers [relating to deals made in 2013, compiled by Real Capital Analytics] on the buy side and the sell side. You look at the sellers and youve got JPMorgan, Lehman receivers, Deutsche, all the big bank names . . . and on the buyer side, the new big names are private Chinese companies and US Reits [real estate investment trusts].

A key factor in this trend is the extraordinary wealth creation in Asia in recent years. According to Knight Frank, the number of high net worth individuals (HNWI, defined as those with net assets of at least $30m) increased by 35.6 per cent between 2007 and 2012, and they have demonstrated a keen interest in property.

The report divides Chinese overseas investors into three waves: the first, those buying homes in countries where they have business interests; the second, those buying for their offspring or to secure permanent residency; and a predicted third wave looking to buy property in an ever wider range of locations. It is certainly worth considering the huge potential for growth in the Chinese market, and Asian buyers more generally, but these expectations are based on an assumption that the spending power of Asian UHNWI will continue to increase, and that the tastes of these buyers will broaden as their wealth matures.

In recent years, Asian buyers have made an impact on cities around the world, with Hong Kong, Singapore, Mumbai and London among the top locations for residential investment.

Adam Challis, of Jones Lang LaSalle in London, says he is seeing high demand from Singapore and Kuala Lumpur, while interest from Hong Kong and China remains strong. Its fair to say that the demand is much bigger than this city, or any individual city in the world, can reasonably meet, he says. The anecdote I use is from [London mayor] Boris Johnsons tour a few months ago when he launched London.cn [Londons official Chinese-language website]. We had one of our colleagues there as part of the trade mission and in her blog report she said that in the first 24 hours of the website going live there were 82m hits.

All these things are heading in one direction, which is upwards, because its coming from a low base and the potential size of this market is enormous, says Liam Bailey, head of Knight Frank residential research. It may not be rapid growth, but it would be surprising if we didnt see more Chinese owners of properties in rural France or rural Italy, or even outside the big cities in America.

However, much of this expected growth is still tempered by cultural conventions. Newly wealthy in mainland China, for example, prioritise security and investment diversification, so will tend to buy second homes in established global cities before they look at holiday homes. And in a country where rural dwellings are still associated with poverty, and a taste for sunbathing and winter sports is yet to flourish, the demand for leisure locations or country houses (French vineyards aside) remains limited. That said, the countrys own leisure industry is beginning to develop, and over the coming years, rich Chinese buyers might look to invest closer to home.

Youve got the tip of the iceberg at Hainan Island, says Barnes, referring to the Chinese resort island which was made a special economic zone in 1988 with the aim of increasing domestic and foreign investment. I think its very interesting that the early adopters there have been retirees, or about to retire, and that may be the first area that Chinese leisure takes off.

Throughout the past decade, China has asserted itself as Asias economic powerhouse and Chinese buyers have made the most of exchange rate advantages and the revaluing of European and US real estate. At the start of 2013 the Chinese economy slowed, and this appeared to impact the rate of wealth creation at the very top. A report by Wealth-X and UBS published in September last year notes that although the number of UHNWI in Asia rose from 42,895 to 44,505 in 2013, in China numbers fell from 11,245 to 10,675. Meanwhile, as old-world economies begin to show signs of recovery, the UHNW population has increased by 5,225 and 4,625 in the US and Europe respectively.

Then there are the wider economic factors to consider. Many believe the US Federal Reserves decision to begin tapering its monthly asset purchases from $85bn to $75bn will damage local property markets, as liquidity conditions tighten and interest rates begin an expected rise.

Even before the announcement was made last month, Knight Frank predicted that prices of top-end homes in Hong Kong would drop 5 to 10 per cent in 2014, with mass residential prices falling 10 to 15 per cent, as housing yields fell and the government continued its cooling measures.

At the start of 2013, when 10-year bond yields were at 1.76 per cent, one could make the argument that to buy a luxury home and to get a rental yield of 2.3 per cent still seemed to make sense, says Paul Louie, head of property equity research for the Asia ex-Japan region at Barclays Hong Kong. But as you add tapering, resulting in the 10-year bond yield going up about 3 per cent, how do you justify buying a home which only yields 2.3 to 2.8 per cent and very little growth profile? He does not believe that the downward spiral in Hong Kong will trigger major price falls in mainland China, but notes that it could prompt a correction of house prices in Singapore, a market that is closely aligned.

Others, however, are keen to point to the positives behind the tightening of monetary conditions. Yolande Barnes admits that it spells the end of the top-end bonanza, but she points to the improvement in the US and UK economies and, in turn, rising incomes in more mainstream markets.

In 2013 we started to see this in London, where the ultra-prime market is still growing but at a slower rate than some other prime markets, says Barnes. Thats a very strong indication that its beginning to be London-generated wealth rather than overseas-generated wealth, or high-end-generated wealth, that is feeding the market and I think thats going to be a pretty powerful force and factor in 2014.

Should this be taken to mean a more even distribution of wealth over the coming years, a slight sapping of power from the super-rich, it is perhaps necessary to end with this sobering thought: Wealth-X predicts that in 2020 the worlds population of UHNWI will exceed 260,000. Their combined wealth? More than $40tn.