TOKYOJapan's long-frozen property market has thawed enough for Toshiko Oguchi to sell her condominium, a hopeful sign of economic recovery from a national slump stretching back two decades.

The Japanese-language teacher in her mid-60s had been living in her three-bedroom apartment in a posh Tokyo neighborhood for more than 30 years, trapped by Japan's 65% fall in housing prices between 1991 and 2013.

But ads from real-estate agents began piling up in Ms. Oguchi's mailbox this summer. Encouraged, she put her condo on the market in late September, and it was snapped up a week later for a seemingly miraculous priceabout 30% more than she paid. 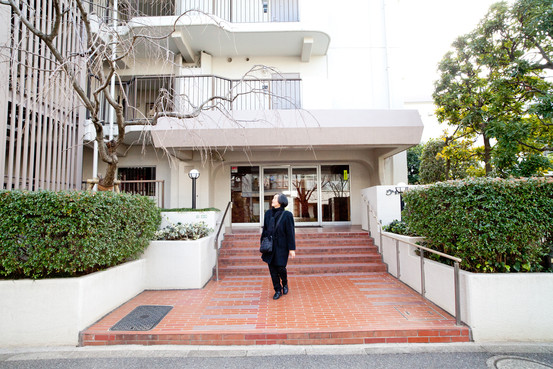 Toshiko Oguchi passes a favorite cherry tree at the Tokyo condominium building where she sold her unit in the rebounding local housing market. Hisashi Murayama for The Wall Street Journal

Within weeks, two longtime neighbors also sold their flats and moved. "I've never seen anything like this," said Ms. Oguchi, who wanted a smaller apartment for her senior years.

Economists say a real-estate recovery would help reverse the debilitating psychic damage suffered by Japan's consumers after years of falling prices. The nation's so-called deflationary mind-setcharacterized by a deep-seated pessimism about the futurehas steered Japanese toward hoarding and caution, and away from spending and risk-taking.

The conviction that tough times will continue indefinitely has been a drag on Japan's economy. Instead of spending, Japan's wary consumers scrimp and sock money in the bank at a savings rate four times the U.S.

The caution was well-deserved. Real-estate prices declined for nearly a quarter century and wiped out an estimated $9.3 trillion in national wealth during the worst of Japan's asset drop, between 1990 and 2002, according to the Nomura Research Institute.

But evidence of a rebound is encouraging. Average sale prices for new condos in Tokyo have reached their highest annual level since 1992, according to the Real Estate Economic Institute Co. A three-bedroom apartment of about 1,290 square feet, for example, sold for $1.7 million this fall in the popular Shinjuku area of Tokyo.

Sales of new condos in Tokyo grew by 31% between May and December last year, compared with the same period in 2012.

Resale prices are growing at a slower pace. The Tokyo Stock Exchange Home Price Index, a Japanese version of the S&P/Case-Shiller Index that tracks condo prices in Tokyo, was up 3.3% in October from the previous year, but still 11% below the precrisis 2007 peak, and 59% below June 1993 prices, the earliest index listing.

Sales of existing condos in the Tokyo area grew 17% between May and September last year compared with the same period in 2012, according to Real Estate Information Network For East Japan, which tracks sales. 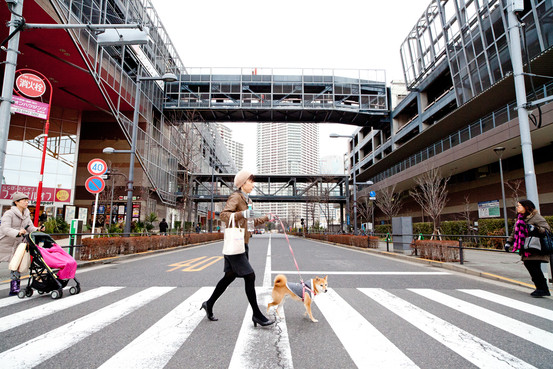 A pedestrian passes a shopping mall in a popular Tokyo neighborhood. Hisashi Murayama for The Wall Street Journal

Growing confidence in real estate followed the aggressive monetary-easing and government-spending policies of Prime Minister Shinzo Abe, who took office a year ago promising to end 20 years of falling prices.

Japan was one of the fastest-growing among developed nations in the first half of 2013, with its economy expanding at an annualized pace of about 4%, although growth has slowed in recent months. Stocks have benefited, too, with the Nikkei Stock Average rising 57% last year.

The Bank of Japan's report released last week showed the recovery spreading to all of the nation's regional economies.

There is still a long road ahead. Japan's property decline was so steep that average prices remain 71% below their peak in 1991. Nearly a quarter of the population has never seen a sustained price rise longer than a brief spike between 2005 and 2008. And overall land prices are still declining nationwide.

But a government survey of major urban areas showed increases in more than two-thirds of the areas tallied over the summer.

Economists say rising real-estate prices in the high-demand neighborhoods could trigger a positive cycle of home-buying and land appreciation, spurring increases in wealth and spending. "You can't turn around the deflationary mind-set until property prices stop falling," said Yuichiro Kawaguchi, a professor at Waseda University who teaches real-estate finance.

Ms. Oguchi, who looked outside Tokyo for a new home, was surprised to find prices rising over a matter of weeks this fall. She looked at 15 condos for sale near the port city of Yokohama, south of Tokyo. Fearful of being priced out of the market, she bought a 20-year-old condo further from Yokohama than she had wanted. "I panicked a little," she said.

The property market is still far from robust. Slightly more than 80% of 1,038 people who sold real estate to buy new homes in the Tokyo area between April 2012 and March 2013 lost money on their sale, according to a June survey by the Association of Real Estate Agents of Japan.

But borrowing costs remain cheap, with 20- to 30-year mortgage loans offered at rates between 1.8% and 2.5%; 10-year mortgages are below 1.5%, though they are expected to rise with inflation as the economy improves.

Housing starts have risen for 15 straight months, the longest streak since the early 1990s and driven largely by new single-family homes outside Tokyo's urban core.

Much like the U.S. housing recovery, property prices in Japan are spotty, depending on the city and the neighborhood. Sales and prices for new condos have moved slower in the western part of Japan, for example.

Tokyo real-estate agents say the local boom is fueled in part by buyers seeking to purchase newly constructed homessubject to a sales taxbefore the tax grows from 5% to 8% in April. Some economists worry the tax increase could chill the market.

Many of Japan's hottest-selling neighborhoods are in central Tokyo, close to financial districts. Nomura Real Estate Development Co., for example, sold 306 condos in the Shinjuku area from mid-October through early December, with average prices of $660,000 for apartments under 800 square feet. Real Estate Economic Institute figures show inventories of new condos in these areas fell 19% in November compared with a year earlier.

But hanging over his office is the fear of another collapse, similar to market drops that followed the 2008 financial crisis and 2011 earthquake. "The number of clients is increasing, and we're so busy that we can't really take days off,'' he said. Still, he added with a hint of his country's deflationary mind-set, "the recovery is not strong enough to get excited over."

Yusuke Yamada is the kind of new-home buyer keeping real-estate agents busy. The 27-year-old cellphone-company employee decided to buy his first condo in July, prompted by a concern that prices would rise and erode the value of his savings. He spent five months researching the popularity ranking of cities and the most-coveted apartment designs. He combed online websites showing price trends.

Mr. Yamada's quest ultimately took him to a 44-story tower in Tokyo Bay, an area of reclaimed land about 2 miles southeast of central Tokyo. Prices there are expected to benefit from a proposed casino resort and new projects linked to the 2020 Olympic Games.

Mitsui Fudosan Residential Co. and the five other developers responsible for the tower erected a three-story sales pavilion containing three condo models near the project site. Prospective buyers ride an escalator through a dark hall with stars projected on the ceiling to simulate the condo's observatory deck and take a canoe ride to the construction site.

The sales pitch includes a 10-minute movie portraying a dream life for buyerswith actors living in a condo surrounded by night stars and a green forest, and two children who grow up to be an astronomer and botanist.

Mr. Yamada visited the sales pavilion in May. He returned with his girlfriend two months later to sign a contract for a condo on the 39th floor selling for ¥52 million, or about $500,000. As he signed, more than 20 people gathered in a nearby room for a real-estate seminar arranged by the developers.

"People feel that it's time to make a decision now since rates on mortgage loans will start to go up as the economy gets better," said Yutaka Saitou, executive manager of Mitsui Fudosan's sales group. He supervised the sales staff at the pavilion.

Since sales began in July, 86% of the 1,110 units have sold, Mr. Saitou said, with the first move-ins to begin after construction is completed in 2015.

Mr. Yamada said he hoped the value of his condo would rise, but he wasn't completely optimistic about Japan's recovery or his own prospects. He said he didn't expect his salary to go up anytime soon, and he was cutting back on purchases to prepare for his condo transaction.

Mr. Yamada tracks seven categories of expenses including rent, food and transportation in an Excel spreadsheet. He now bikes to work, one of the corners he has cut to save ¥100,000, or about $960, a month for his 20% down payment. He has until March 2015, when his unit will be ready.

Tokyo resident Takashi Kubota, a 29-year-old former worker at a coffee-shop chain, is bullish on real estate but still clings to a deflationary mind-set.

The barista, who left his job in October to set up his own business creating YouTube video guides for foreign visitors, is saving to buy a used condo as a rental property. He is counting on Japan's rock-bottom interest rates, figuring he can supplement his income by renting the apartment out for more than his monthly mortgage payment.

Unlike Mr. Yamada, Mr. Kubota isn't expecting his purchase to appreciate. In fact, he said, he was prepared for prices to fall. But his instructors at the Tokyo-based Financial Academy show how real-estate investments can yield a return of at least 10% a year when mortgage rates are very low.

Mr. Kubota said he was aiming to buy an apartment for ¥5 million or lessa price tag 2½ times his annual income last year of ¥2 million. He planned to finance the purchase with savings and a 20-year mortgage. He saves as much as 70% of his monthly income, he said, in part by living with his parents. He has so far accumulated about ¥4 million.

Mr. Kubota said he was unlikely to change his pessimistic view of the market, or his investing style, even if property prices continue to rise.

"Pursuing capital gains is like gambling," Mr. Kubota said. "It doesn't matter whether the economy goes up or down. I don't want to take high risks."

Write to Kana Inagaki at kana.inagaki@wsj.com