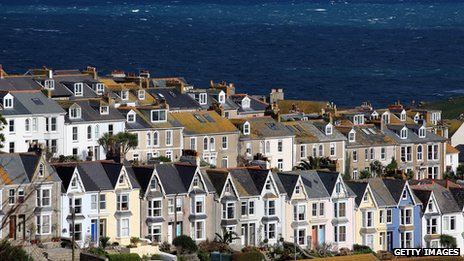 House prices across the UK rose by 7.5% last year, according to the Halifax, the country's largest mortgage lender.

However, Halifax said prices actually fell by 0.6% in December, taking the average price of a property to £173,467.

Last week, the Nationwide building society said house prices had risen by 8.4% in 2013.

Separately the house-builder Persimmon gave an upbeat assessment of the market over the calendar year.

Looking ahead, the Halifax predicted that prices in 2014 would continue to rise at a similar pace to last year.

Martin Ellis, the Halifax's chief economist, said the UK's economic recovery was likely to boost confidence in the market further.

"This will increase the likelihood that more people will consider buying a property in 2014, therefore supporting housing demand," he said.

The increase in house prices in 2013 was more than three times the rate of CPI inflation, which rose by 2.1% between November 2012 and November 2013.

The Halifax also said that the number of housing transactions last year is likely to have exceeded one million for the first time since 2007. 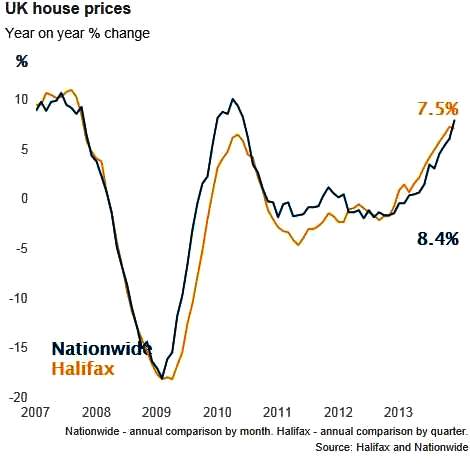 It said completions had accelerated during the year.

The government's Help to Buy scheme may have helped that process.

The first part of the scheme, involving government equity stakes, began in April.

The Bank of England also reported that the supply of mortgages became more available in the last quarter of 2013, particularly to those borrowing a high percentage of their home's value.

In its latest Credit Conditions survey, it said lenders were becoming more willing to give mortgages to people wanting to borrow 75 or even 90% of the value of their properties.

It said this was partly due to the Help to Buy scheme, where buyers only have to find a 5% deposit.

Lenders are also being less strict about who they lend to.

"Consistent with an increased risk appetite, credit scoring criteria were loosened and the proportion of loan applications being approved increased significantly," it said.

The Bank also expects a "significant" increase in the supply of mortgages in 2014, despite the fact that support from the Funding for Lending scheme has now been withdrawn from mortgages.