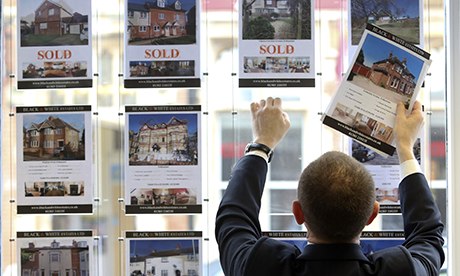 Estate Agents And For Sale Signs

The rise in house prices will dismay would-be buyers and increase fears of a housing bubble. Photograph: Bloomberg

The return of first time buyers to Britain's housing market helped push prices almost 9% higher in the year to January, according to the country's biggest building society, adding more than £14,000 to the price of a typical home.

Nationwide's latest monthly house price index, based on mortgages approved by the society, recorded its 13th consecutive monthly rise, with prices up 0.7% in the month. The annual rise of 8.8% was the highest level since May 2010, bringing the average cost of a home to just under £176,500.

In the last three months of 2013, 73,700 borrowers across the country were buying their first home, a 32% increase on the previous year, according to the Council of Mortgage Lenders.

But the strong start to 2014 will dismay any would-be buyers who may have been hoping the market would slow down after a busy autumn, and will strengthen calls for the Bank of England to take action to prevent a bubble.

The housing charity Shelter described the figures as "worrying" and called on the government to come up with "bigger, bolder" ideas to create more affordable homes.

"There have been encouraging signs that activity levels in the housing market are also gradually returning towards more normal levels," he said. "The pickup in activity appears to be fairly broad-based, and it is encouraging that first-time buyers are a key driving factor behind the upturn."

Government schemes such as Funding for Lending and Help to Buy have made it easier for banks and building societies to offer mortgages to people with small deposits, while the improving jobs market has increased confidence.

However, rising prices mean the average house price is now 4.6 times average earnings, Nationwide said, well above the 20-year average of 3.6 times earnings  although it is below the high of 5.4 recorded in 2007 at the peak of the last boom.

Gardner said borrowers were lengthening the term of their mortgage to cope, with 52% of mortgages arranged over more than 25 years, up from 40% in 2007.

He said the return of first-time buyers was encouraging, as they were "the lifeblood of the housing market". But he warned they needed to be cautious when taking on loans. "More than a million first-time buyers have entered the market since the Bank rate was cut to a 300-year low in early 2009, many of whom have yet to experience a hike in interest rates," he said.

Separate figures from the Land Registry highlighted again how patchy growth has been  while prices in the London borough of Hackney rose by more than 17% in the year to December, in Hartlepool they dropped by 6.6% to an average of £70,350.

The Land Registry data  which does not include newbuild properties or homes that have not changed hands since 1995 and is based on completed sales  showed that across England and Wales prices increased by 1.1% in December to an average of £167,353.

The annual rate of house price inflation was 4.4%, but this was outstripped in London  where prices rose by 2.6% in December, and were up by 11.2% year on year  the south-east and the east of England.

In Yorkshire and the Humber, they fell by 1.2% over the month and were up by only 0.5% annually.

Several London boroughs recorded double-digit growth, with Hackney's price rise closely followed by rises of more than 16% in Waltham Forest in north-east London and Wandsworth in the south-west.

Howard Archer, chief UK economist at IHS Global Insight, said: "The strong monthly rises reported by the Nationwide and the Land Registry will maintain concern that a new housing bubble could really develop in 2014, especially as the strength in house prices is spreading.

"At this stage though, only the pace of house price rises in London is really a serious cause for concern."

Campbell Robb, Shelter's chief executive, said the figures showed that prices were "continuing to spin out of control", taking with them thousands of young people's and families' dreams of a home of their own.

"However hard they work or save, many are left with no choice but to remain trapped in unstable rented homes or living in their childhood bedrooms, watching the prospect of a stable home slip further away," he said.

"To give future generations a chance, the government needs to roll up their sleeves and come up with bigger, bolder ideas to get more affordable homes built."