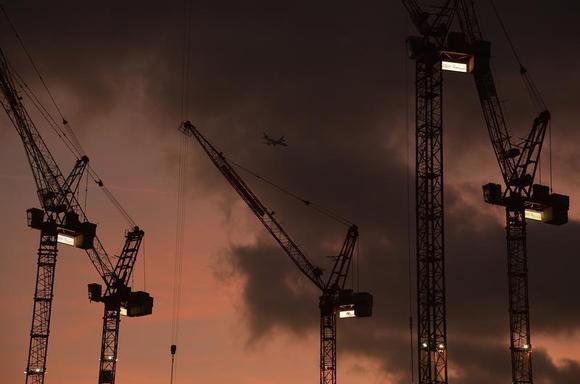 A plane flies behind cranes standing on construction sites, at dusk in London December 9, 2013. REUTERS/Toby Melville

A plane flies behind cranes standing on construction sites, at dusk in London December 9, 2013.

(Reuters) - British house prices grew more slowly for a second month in a row in January but are likely to keep on rising strongly in coming years, thanks largely to a shortage of properties on the market, a survey showed on Thursday.

The Royal Institution of Chartered Surveyors (RICS) said its main house price balance measure eased to +53 in January from +56 in December. This was lower than a Reuters poll forecast of +57 but still close to November's 11-year high of +58.

Despite the slowdown, a net balance of more than 50 percent of surveyors reported rising prices for a fifth straight month, the longest such run since 2002, RICS said.

The group said expectations that prices would continue to rise were underpinned by a lack of properties on the market.

During January, the number of houses coming up for sale hit its lowest point since July 2012, RICs said.

Britain's housing market has been bolstered by falling unemployment, low interest rates and government programmes to make mortgages cheaper and easier to obtain, raising concerns about the risk of an asset price bubble.

"With more people now in a position to buy a home than at any point over the past few years, there are simply not enough properties to satisfy demand," said Peter Bolton King, RICS Global Residential Director.

As demand outstrips supply, contributors to the survey expected prices nationally to rise by more than 6 percent a year over the next five years, RICS said in a statement.