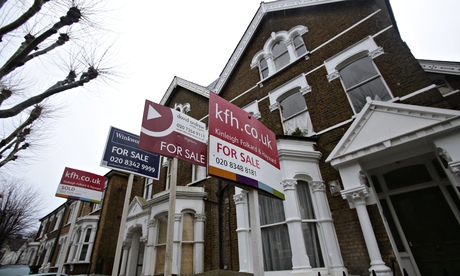 Surging house prices have prompted a wave of sellers to put their homes on the market, according to Britain's biggest property website, Rightmove, but it added that near-frenzied buying activity is sending asking prices to record levels.

The average asking price on the site jumped by £8,103 in January, equal to £261 a day, with the typical property now costing £251,964. Rightmove also said it had its 10 busiest days ever in January, with house hunters looking at 50m property pages a day for the first time, or about 500 a second.

The number of potential buyers sending emails to inquire about properties was also up around one-fifth compared with January last year and there was "firm evidence that interest is serious and being followed up", it said.

The booming market has provoked a big increase in the number of sellers, with 18% more properties being listed than a year ago. But Rightmove said it is yet to affect the supply shortage, as the number of homes being snapped up and removed from the site has risen in tandem.

Estate agents said they were also seeing more sellers come to the market. Haart, which is part of the largest estate agency group in the UK, said the number of properties advertised in its windows had increased by 10.6% over the past year. Its chief executive, Paul Smith, said: "It's good news that stock levels are increasing. However, new buyer registrations are up 41.2% annually so the market is still out of kilter."

The conventional approach to buying a home - where someone finds a house they like, then puts theirs up for sale  is breaking down in many local markets, where estate agents are not interested in prospective buyers unless they have sold already and can proceed immediately.

"Especially in the south, agents report that buyers with a property yet to sell are losing out to buyers able to proceed with speed," said Miles Shipside, a director and housing market analyst for Rightmove.

But bubble-like conditions in some parts of the country are making first-time buyers stretch themselves too far, warned the government-backed Money Advice Service. It researched 1,000 first-timers who had bought over the past two years, and found that one in five wished they had bought somewhere cheaper.

More than half admitted that the running cost of their first home was also more than expected, prompting the service to warn buyers: "You can afford your mortgage, but can you afford your home?"

Affordability is most stretched in London and the south-east. Haart said that over the past year, the average property it sold in London went up by 18.4% to £448,800, a rise of £69,784 over the year, double the average salary of a Londoner.

A Guardian/ICM poll last week found a growing exhaustion with rising house prices among the general population. Only 14% of people want house prices to continue to rise, while 63% would prefer they remain stable and 20% want prices to fall.

When asked to name the biggest problem in housing, 29% said it was buyers priced out of the market, a quarter said it was the lack of council housing, and 15% said it was excessive private rents.

But despite their despair over prices, most households expect them to continue to rise this year. A sentiment index produced by the upmarket agents Knight Frank found that households in every region of the UK perceive that the value of their home will rise over the next 12 months.

Expectations that rising interest rates may puncture a potential property bubble were dashed last week by the Bank of England governor, Mark Carney. He said he was comfortable with the City's view that interest rates would not rise before the spring of 2015 and then rise gently to 2% by 2017.

Figures from the Office for National Statistics suggest that higher house prices are also provoking a building boom. Figures released late last week revealed that in 2013 there was 1.3% annual growth in construction output, but it was "almost solely" attributed to housebuilding, which jumped by 10.4% (£2.1bn) year on year.