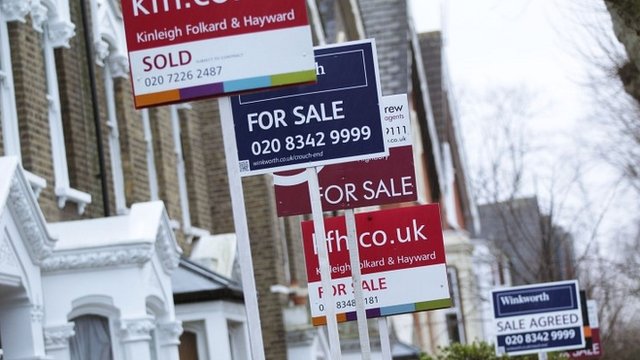 House prices rose by 0.6% in February, a 9.4% increase on the same month in 2013, according to the Nationwide Building Society.

The annual rate of growth is the fastest for almost four years.

Meanwhile the average house price in London has risen to £410,000, according to the Land Registry for England and Wales.

Its latest monthly report said London prices were rising fast - up 2.1% in January - which left them 11% higher than a year ago.

The Nationwide said the rise in sales and prices were being driven by record low interest rates, higher employment and the easier availability of mortgages.

The lender's chief economist, Robert Gardner, acknowledged that prices could accelerate even faster in the coming months, as more people took the plunge to buy for the first time or move.

But he denied a house price "bubble" was being created.

"If you look at prices relative to earnings then housing does look relatively expensive by historic standards," Mr Gardner told BBC News.

"But if you look at how much it costs to service a typical mortgage, that suggests that housing isn't overly expensive at this point... because interest rates are at such low levels."

The Nationwide pointed out that prices were also being driven higher by a continued lack of new homes.

"Price growth is being supported by the fact that the supply of housing remains constrained, with housing completions still well below their pre-crisis levels," said Mr Gardner.

He added that just 109,500 new homes were built in England in 2013, which was 38% below the level recorded in 2007, and about half the projected number of new households expected to form each year.

New apartments in Brixton, London Average London prices are now double those across the rest of the country
The Nationwide's figures are based on a sample of its own lending and they show that on its own measure, house prices across the UK have been rising for the past 14 months in a row.

London has again led the surge in prices. The building society said house prices in the capital, at £345,186, were almost twice those elsewhere in the UK.

The precise level of house prices, and how fast they are rising, is a matter of some dispute. The numerous monthly surveys give quite different readings, though they are all recording a rise.

For instance, the Land Registry's latest report says average house prices in England and Wales rose by 1% in January to £168,356, a monthly rise of 1%, but leaving prices just 4.2% higher than a year ago.

Meanwhile, the government's own house survey, published by the Office for National Statistics (ONS), said earlier this month that prices were only 5.5% higher than a year ago - but that they had already reached a record national average of £250,000.

The Nationwide figures come in the same week that some UK housebuilders reported their profits had more than doubled, thanks to the past year's revival of activity and subsequent increased demand for new homes.

Barratt Developments on Thursday recorded a 162% rise in pre-tax profits to £120m for the six months to the end of December.

Redrow's comparable figures revealed a 107% growth in profits to £48m.

Meanwhile, Persimmon said its profits jumped by more than 50% last year to £337m, thanks in part to the government's Help to Buy scheme.

The government's own figures show that despite the attention being given to Help to Buy in the housebuilding industry, its "equity loan" element, launched in April last year, has so far financed only 15,000 completed house purchases in England.

However, there are more in the pipeline, and even more sales may yet be stimulated by the recently launched second part of Help to Buy, which offers a government guarantee against losses for lenders who are prepared to offer mortgages to people with only a small deposit.