Sold and for sale signs are seen on a new housing development in Kirkham in northern England July 26, 2013. REUTERS/Phil Noble 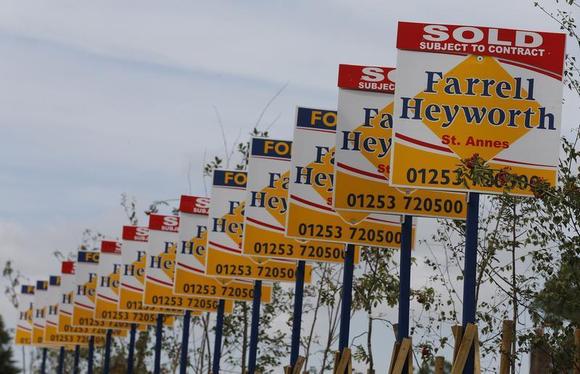 Sold and for sale signs are seen on a new housing development in Kirkham in northern England July 26, 2013.

(Reuters) - British house prices recorded their biggest annual rise in nearly four years this month despite a slowdown in the month-on-month rate of growth, data from mortgage lender Nationwide showed on Friday.

House prices rose 0.6 percent in February, the slowest pace of monthly growth since June last year and down slightly from an upwardly revised increase of 0.8 percent in January, Nationwide said in a statement.

But in year-on-year terms, house prices in February were 9.4 percent higher than in the same month last year, stronger than a rise of 8.8 percent in the 12 months to January and the biggest annual jump since May 2010.

Prices in the three months to February also rose strongly, growing by 3.0 percent compared to the previous three-month period. January saw a similar increase, a rate of growth last seen in November 2009 when prices were bouncing from a trough reached earlier that year.

Prices were being pushed up by a shortage of properties coming onto the market, in particular new homes, as well as record low interest rates, easier mortgages and growing consumer confidence, Nationwide's chief economist Robert Gardner said.

"Price growth is being supported by the fact that the supply of housing remains constrained, with housing completions still well below their pre-crisis levels, which was already insufficient to keep up with the pace of household formation," Gardner said in a statement.

Prices remained about 3 percent below their peak in 2007, Nationwide said.

The Bank of England has said it is watching the housing market closely. Most officials have played down suggestions that it could be overheating but one policymaker, Martin Weale, said last week he was worried that house prices were "very elevated".