Property prices up for more than half of England and Wales for first time in a decade, with an average rise of 0.7% in January 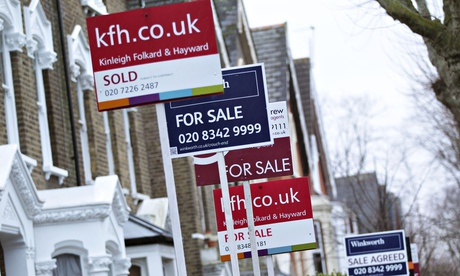 London and beyond. A report points to an influx of first-time buyers into the market, with numbers up a third in January compared with the same month last year. Photograph: Yui Mok/PA

The surging housing market has broadened out beyond London and the south-east, with prices up in more than half the country for the first time in 10 years, according to data from property researchers Hometrack.

In England and Wales, prices rose for 51% of postcodes in February, the highest proportion since July 2004, researchers said. This pushed average prices up 0.7% the biggest monthly rise since April 2007.

"The housing recovery continues to spread across the country, building on the momentum that started a year ago," said Hometrack director Richard Donnell.

"This is the greatest coverage of house price growth for almost a decade showing the extent to which market sentiment has improved in the last 12 months."

The figures showed the sharpest gains around the country were still in London, with prices up 1.1% in a month, followed by the south-east, up 0.9%. All other regions registered price gains below the England and Wales average as buyers remained cautious, it said.

A separate report released on Monday pointed to the influx of first-time buyers into the market, with numbers up by a third in January compared with the same month last year. That helped push up first home purchase prices by 16% over the 12 months, significantly higher than overall house price inflation. The average first home now costs just under £156,000, according to data from property services company LSL  up £5,000 in a month.

The reports follow figures from lender Nationwide on Friday that showed the average price of a home was 9.4% higher than a year ago, the biggest increase since the coalition came to power in 2010.

The data will fan fears that parts of the housing market are overheating, fuelled by the long-standing mismatch between supply and demand and the government's much criticised Help to Buy scheme, the aim of which is at help people who cannot afford a large deposit to get a mortgage.

With house prices rising and mortgage approvals up, housebuilders last week reported surging profits. But the government, including David Cameron, has dismissed concerns that Help to Buy might be feeding a housing bubble, arguing that average prices are still below their pre-crisis peak.

Hometrack said the latest rises echoed a pick up in demand, with a 17% jump in new buyers registering with agents in January.

The company said improving consumer confidence and low mortgage rates were driving increased demand for housing across a growing number of markets beyond the south-east.

There was some pickup in the stock of housing for sale, which rose 11.2% over the month, marking the highest increase in supply for almost seven years. But the property search site Rightmove noted the supply of homes for sale was growing off a low base.

With the mismatch between supply and demand keeping upward pressure on prices, the proportion of the asking price achieved by sellers continued to increase in January (95.8% across England and Wales and 98.8% in London).

In the East Midlands and Wales, however, the proportion remained below 94%.

The figures from LSL Property Services showed first-time buyers registered at its two estate agent chains were paying bigger deposits, with an average of £27,519.

But with real wages stagnating, deposits are making up a bigger proportion of buyers' incomes. The average deposit represented 75.1% of a first-time buyer's income in January. Repayments as a proportion of income were also rising, although they remained at 22.4%.

"While the property market has been firing forwards, wage growth has been stuck in the mud of the economic recovery," said David Newnes, director of estate agents Your Move and Reeds Rains, part of LSL.

But he said the rising pressure was not blocking new buyers from the property market because of higher loan-to-value (LTV) lending.