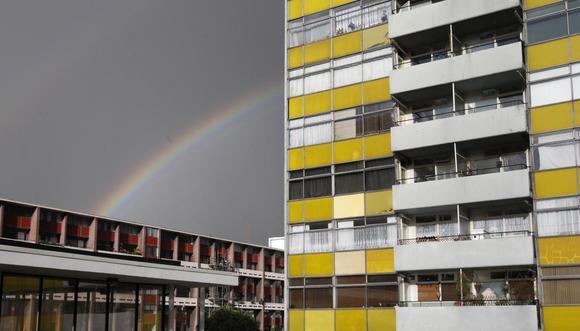 A rainbow appears over a housing estate in east London March 3, 2014.

LONDON (Reuters) - British house prices rose at the slowest pace in six months in February, but strong expectations for rising prices and activity suggest the housing market recovery still has a long way to run, a survey showed on Thursday.

The Royal Institution of Chartered Surveyors (RICS) said its main house price balance measure eased last month to +45, its lowest since August, from +52 in January, downwardly revised from +53 reported earlier.

February's reading was below all forecasts in a Reuters poll of economists that predicted an unchanged balance of +52.

RICS suggested the easing in levels of activity last month may have been down in part to bad weather, with rain, wind and flooding making people less inclined to go out and view houses.

And although buyer numbers increased at the slowest rate since March 2013, the survey showed expectations for prices and sales are still around peak levels.

"The ongoing issue that we are facing is the lack of homes coming onto the market. Yes, it is true that more and more are being built, but supply is simply not enough to satisfy demand," said Simon Rubinsohn, chief economist at RICS.

"As a result, prices are likely to continue to move higher, making it ever harder for people to take an initial step onto the property ladder."

Britain's housing market has been bolstered by falling unemployment, low interest rates and government programmes to make mortgages cheaper and easier to obtain, raising concerns about the risk of an asset price bubble.

As demand outstrips supply, contributors to the survey expected prices nationally to rise by 5.9 percent a year over the next five years, RICS said, with prices increasing at a much faster rate in London and southeast England.

Bank of England governor Mark Carney said on Tuesday that the BoE was concerned that a rising housing market, thanks partly to increases in prime central London properties, could encourage people to take greater risk without taking into account how interest rates change over the lifetime of a mortgage.