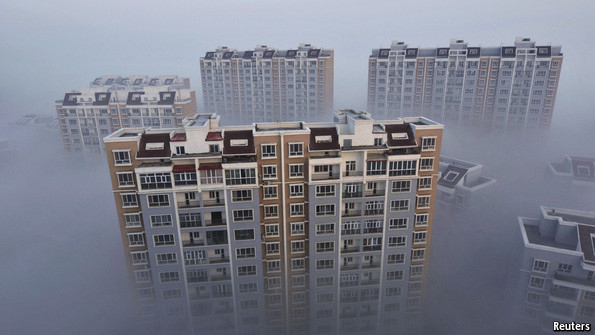 CAN bubbles ever pop twice? In late 2009 the world began to worry about a Chinese property bubble, symbolised by Ordos, a newly built city, bereft of citizens, in Inner Mongolia. In the spring of 2010 Chinas government broadened its curbs on multiple home purchases and mortgage borrowing. The following spring, prices in nine big cities fell at last, according to one widely watched index. The Great Property Bubble Of China May Be Popping declared the Wall Street Journal in June of that year.

This week the same newspaper cited compelling signs the Chinese property boom is over, noting that Cassandras have been predicting a crash for years. (The Cassandra of Greek myth could tell the future but was never believed. For Chinas property Cassandras, things are the other way round: their direst predictions are often believed, but have yet to come true.)

Bubbles often go on longer than expected. This newspaper warned about Americas internet and housing bubbles years before they burst. What is unusual about Chinas bubble is not its persistence but its prevarication. It seems to be bursting for a second time. Property prices did peak in 2011, as the Journal noted. But the following year, they started to rise again.

Prices are still rising in 69 of the 70 cities tracked by the official statistics (Wenzhou in Zhejiang province is the exception). But residential sales fell by 5% in the first two months of the year, compared with a year earlier. And other statistics paint a darker picture, points out Nomura, a bank, which believes that property now poses a systemic risk to Chinas economy. 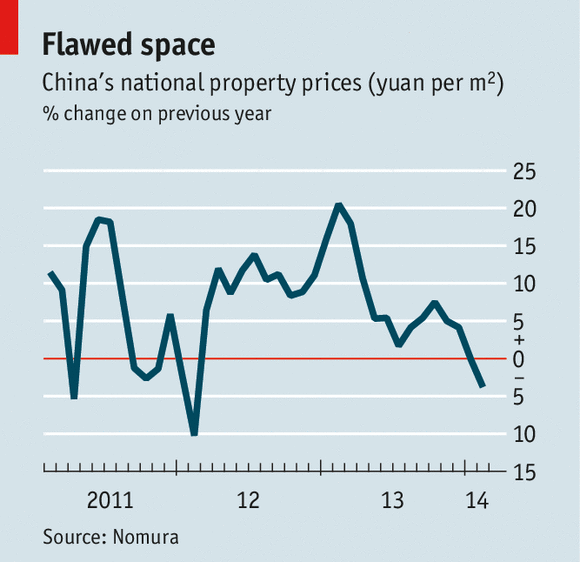 Nomura (among others) calculates an alternative property-price index by dividing the official figures for the value of housing sold nationwide (599 billion yuan, or $96 billion, in the first two months of 2014) by the floorspace sold (94m square metres). That suggests the price per square metre was about 6,400 yuan. By this (volatile) measure, prices fell by 3.8% compared with a year earlier (see chart). That has not happened since February 2012.

Falling prices would be a natural outcome of Chinas frenetic pace of homebuilding. China now has almost as much floorspace per person as Italy enjoyed in 2009, Nomura calculates. GK Dragonomics, a consultancy, thinks China needs to build roughly 10m homes a year to keep up with the growing size and aspirations of the urban population (see article). Until 2011, Chinas annual homebuilding was below that figure. In 2012, it surpassed it.

In most countries, that would be reported as good news. A rapid expansion of the housing stock means fewer people living in the boondocks or in urban discomfort. In China, however, this building frenzy is seen as an economic threat, not a triumph. One fear is that Chinas developers are building houses for the wrong people (speculators) in the wrong places (backwaters). Instead of accommodating Chinas overcrowded urban masses, too many houses stand empty, serving as stores of value for people dissatisfied with bank deposits and distrustful of the stockmarket. Another fear is that if homebuilding falls sharply, China may struggle to shift labour and capital quickly enough to avoid an abrupt slowdown in the overall economy.

But the first fear should allay the second. Chinas building boom has left some parts of the country with too much floorspace and other parts with too little. Nearly half of all migrant workers still live in dormitories or on worksites. Where housing is oversupplied, prices will have to fall, inflicting losses on homeowners. But where housing needs remain unmet, scope remains for further construction to fill the gap. For example, the government has said it will spend more than 1 trillion yuan this year renovating shoddy housing. This will help keep homebuilders busy.

Realignment of the industry will be painful for local developers that cannot diversify across regions. These smaller firms have also suffered disproportionately from the governments efforts to curb bank lending to the sector. Cut off from banks, they have borrowed at punishing rates from less regulated trust companies instead. Some went further. The biggest shareholder of Zhejiang Xingrun, a property firm, was recently detained for illegal fund-raising, local reports say. It has debts of 3.5 billion yuan ($565m) that it seems unable to repay. It would not be the first property default in China. But it would be one of the biggest.

Because China has misallocated housing, some parts of the country remain overcrowded while others remain empty. A bubble is always bursting somewhere, even as another inflates elsewhere. In Chinas patchwork housing market, the Cassandras are never right everywhere but they are often right somewhere.