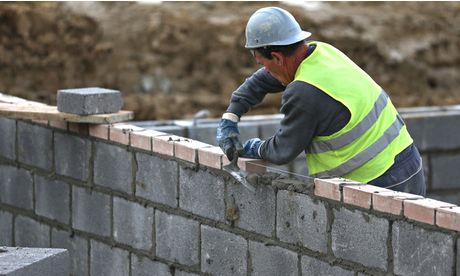 The Home Builders Federation says 260,000 houses need to be built a year to make up for the shortfall. Photograph: Matt Cardy/Getty Images

The UK is now 1m homes short of the number it needs to meet its housing needs, it has been claimed, as official figures showed another rise in property prices in January.

A decade after a government-commissioned report recommended that 210,000 homes needed to be built each year to avert a housing crisis, the Home Builders Federation (HBF) said a "lost decade" meant the shortage was now equal to the number of homes in Birmingham.

In 2004, economist Kate Barker outlined a range of options for the housing market. She said that to keep prices within households' reach, price inflation needed to be kept 1.8% a year, which would requite 210,000 new homes. To improve the situation for households, inflation would need to be kept at 1.1%, which would require 260,000 new homes a year

Instead, over the past decade an average of just 115,000 homes have been built annually by the private sector, according the HBF, with the recesssion and the freeze on mortgage finance during the credit crunch contributing to the low levels of building.

The shortfall over the decade between the figure Barker proposed to keep price inflation at 1.8%, and the number built, now stands at an estimated 953,000 homes.

To exacerbate the shortage the need for new homes is growing. While in 2004 the forecast was for 179,000 households to be formed each year until 2011, the Office for National Statistics now predicts 221,000 will form each year over the decade to 2021.

The HBF said that to reduce the long-term trend in house price inflation to 1.8% and help more people back in the market would now require 260,000 private houses to be built a year.

To achieve Barker's more ambitious aim of improving the housing market by reducing price inflation to 1.1%, the group said would require 320,000 new homes a year  three times the number completed in 2013 and a figure achieved in only four years since the second world war.

The executive chairman of the HBF, Stewart Baseley, said that since the Barker Review was published, successive governments had "failed to pay heed and develop policies to deliver the homes the country needs".

Basely said the Help to Buy equity loan scheme, introduced in April 2013 to offer an interest-free loan to buyers of newbuild homes, had started to drive demand and increase supply, but from a low base.

The HBF said it wanted the government to ensure planning policies were developed so that enough land became available for the number of homes needed, and to ensure that the regulatory environment was "realistic and practical" and did not make housebuilding sites unviable.

"As we approach a general election, we now need to see all parties committing to policies that lead to a sustained increase in housebuilding," Basely said.

"We have to build our way out of the crisis. Building the homes the country needs will provide the decent homes people deserve and create hundreds of thousands of jobs."

Kate Barker said: "The continued shortfall in housing supply matters most to those who lose out in the battle for dwelling space.

"At the moment the cost is falling heavily on many families in the private rented sector. It is vital to raise the rate of new supply  but also to develop coherent policies to address the consequences of the supply shortfall."

The scale of the battle to reduce house price inflation was underlined by figures published by the ONS, which showed the annual rate of increase picked up in January.

London and the south-east continued to drive the headline figures, with annual growth of 13.2% and 7.1% respectively. If those figures were excluded from the overall picture, the rate of price inflation across the UK would drop to 3.8%.

For first-time buyers, who have benefited most from the government's Help to Buy scheme, the average price paid has increased by 7.6% over the year, to £190,000. This is higher than the rate of inflation for home movers, who saw an annual price increase of 6.5% to an average of £291,000.

Campbell Robb, chief executive of the housing charity Shelter, said the ONS figures were "another blow" to the hopes of young people who wanted a home of their own.

"No matter how hard young people and families work or save, these days most simply can't keep up with sky-high house prices, and are instead facing a lifetime of unstable renting," he said.

"If we want to give the next generation a fighting chance, the government has to get serious about building the affordable homes we need now."