House prices rose 6.8 per cent compared with a year earlier - the biggest increase since August 2010 - and up from 5.5 per cent in December, according to figures from the Office for National Statistics.

A Bloomberg poll revealed analysts expected a rise of 6.6 per cent.

London led the increase, with prices up 13.2 per cent, followed by the 7.1 per cent rise in the South East.

Excluding London and the South East, prices went up 3.8 per cent over the year.

Meanwhile, BBA's reported mortgage approvals moderated in February but were up 53 per cent year-on-year.

Estate agency VanHan says that property prices are being pushed up by a structural lack of supply, a burgeoning mortgage market and improving consumer confidence. "While central London storms ahead, regional house prices will play catch up for a few years as mortgage-financed buyers re-enter the market, taking advantage of the cheap rates available."

It adds that growth nationally will be tempered by real earnings growth, despite the outperformance of key markets. Stock that's priced sensibly - in London and elsewhere - is going quickly, and where there's s shortage of decent properties for sale, a "frenzy" is created, "with packed open houses, sealed bids and gazumping, both of the real and the ghost variety, thriving."

In January, first-time buyers paid 7.6 per cent more on average than a year earlier. For owner-occupiers (existing owners), prices increased by 6.5 per cent for the same period. 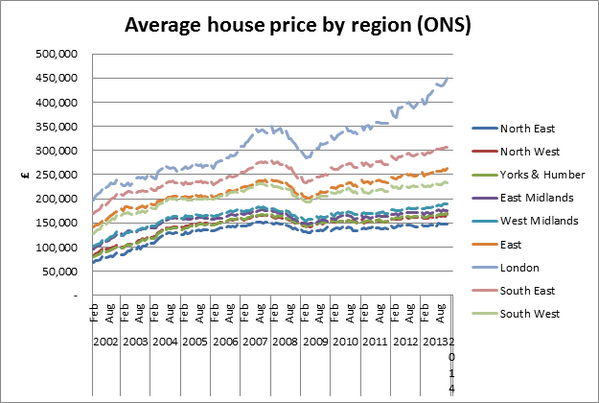 The latest average house prices by regional breakdown by ONS. At this rate London price will hit £500,000 soon