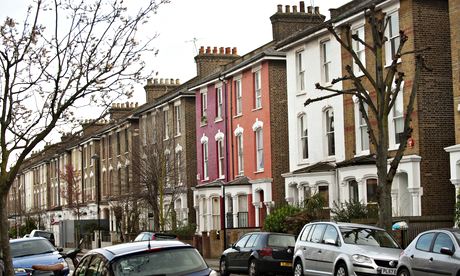 Houses in north London: during the 12 months to January, London property values rose 13.2%. Photograph: Linda Nylind for the Guardian

Prince Charles has warned that predicted house price rises for London are not sustainable and risk driving away young talent.

The prince said the hope of home ownership for those starting their careers in the capital was becoming further and further out of reach.

He was speaking as his organisation the Prince's Foundation for Building Community launched a report which suggested that mid-rise buildings could be the solution.

Addressing the Housing London Symposium, in east London, the prince said: "The National Housing Federation estimates that in only six years' time the average London house price will have risen 40% to £650,000.

"This isn't sustainable and risks driving away talented young individuals who are starting their careers in London and spending most of their income on rent.

"Home ownership for this generation is seemingly becoming further and further out of reach."

Houses in London have a typical price tag of £458,000; prices in the capital are nearly 23% higher than the 2008 peak before the financial crisis, according to figures released on Wednesday by the Office for National Statistics.

During the 12 months to January, London property values rose 13.2%.

The prince said that for a healthy city to prosper, it needs a "built environment that provides good quality housing, the integration of nature and green spaces at its heart, walkable, mixed-use neighbourhoods, good public transport and an identity that fosters pride and a sense of belonging".

He went on to say that the problems with social housing were now well-known and that high-rise blocks caused alienation and social dysfunction.

He added: "It is why I feel so strongly that we must build places which combine market-rate and affordable housing seamlessly, and create places where people actually want to live, that are built with an eye to enduring appeal and where, for example, people can walk from their house or flat to the shop and to the local school."

He highlighted the conclusion of the report: "Mid-rise buildings of between five and eight storeys make ecological sense, too, as they are more adaptable than high-rise, easier to build out of natural materials, are easier to repair and still work for people when the lift is broken or there is a power cut.

"On the building side, mid-rise buildings also allow a greater diversity of developers and builders as the initial outlays required by high-rise buildings make it the business of relatively few.

"For these reasons, I am greatly encouraged by the report's central recommendation that we should consider mid-rise as one of the key solutions to London's necessary expansion."