Bank of England poised to act over house prices momentum

Bank says it is ready to take 'proportionate and graduated action' if necessary, with prices up 10% year on year 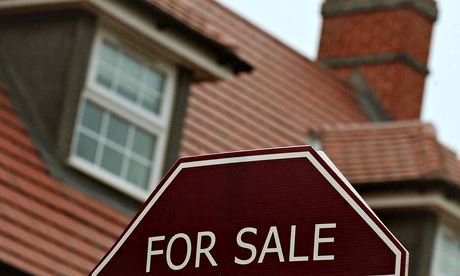 Mortgage demand was up 40% in the year to January Photograph: Rui Vieira/PA

The Bank of England has said it is poised to take fresh steps to slow down Britain's housing market if the pickup in prices and mortgage demand threatens a new property bubble.

In the light of what it called "increasing momentum", the Bank said it stood ready to take "proportionate and graduated action" if it proved necessary.

The Bank's focus on the recovery in the housing market was highlighted in a statement published following last week's meeting of its financial policy committee, whose task is to prevent the economy being derailed by wild swings in asset prices.

The statement noted that mortgage demand was up 40% in the year to January, while surveys by the main mortgage lenders suggested prices were around 10% higher in February than a year earlier.

It said: "In a continuation of a longer-term trend, mortgages at loan-to-income ratios above four times accounted for a higher share of new mortgages in the third quarter of 2013 than at any time since the data series began in 2005. New mortgage lending at high loan-to-value ratios remained low by historical standards, though the number of mortgage products offering higher loan-to-value ratios had doubled over the previous six months.

"Given the increasing momentum, the FPC will remain vigilant to emerging vulnerabilities, will continue to monitor conditions closely and will take further proportionate and graduated action if warranted."

Threadneedle Street intends to oblige banks and building societies to carry out stringent stress tests later this year to see whether they would find themselves in trouble in the event of a slump in house prices or a sharp rise in interest rates.

The statement said the stress tests would be based not on what the FPC expected to happen but on much less favourable conditions. "A key part of the scenario would examine the resilience of the banks to a housing market shock and to a snap back in interest rates."