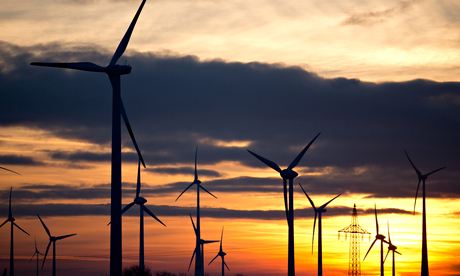 Giant wind turbines have long been accused of damaging house prices. But a new report says that is not the case

Windfarms have no negative impact on the prices of property within a 5km radius of turbines, and can even push up house prices in some areas, according to an analysis of 82,000 transactions over the past two decades by the Centre for Economics and Business Research.

The financial damage to local house prices from nearby giant "eyesore" turbines is frequently cited by campaigners against windfarm developments. But independent CEBR research, commissioned by RenewableUK, the trade body for the windfarm industry, found there was no negative impact when house price data was analysed at seven sites across England and Wales, either during the planning, construction or completion phases of the project.

"At last we have a detailed independent analysis into what actually happens to property prices before, during and after windfarms are constructed, over a period of nearly 20 years. This shows that claims that windfarms might have a negative effect on house prices are unfounded," said RenewableUK chief executive Maria McCaffery.

But campaigners called the research "shoddy and blatantly self-serving". Graham Lang of Scotland Against Spin, said: "As the trade body for the wind industry, RenewableUK's job is to maximise the possibility for profit for its members. Every one knows the closer a property is to gigantic industrial turbines, the less desirable it becomes.

"A house near a wind farm may be harder, even impossible, to sell, as the researchers would have found out if they had sought qualitative evidence from wind farm neighbours or estate agents. The shocking thing is that our politicians have allowed wind developers to get away with avoiding the planning controls and compensation mechanisms which apply to other environmentally harmful development, such as motorways, railways and airports."

The CEBR findings contradict separate research by the London School of Economics, which found that if a windfarm is visible from a house, on average it knocks 5-6% off its sale price, and as much as 15%. It suggested that a typical windfarm of 11 turbines would face a bill of £12m to compensate houses within 4km. Currently, householders in the UK cannot claim compensation from windfarm developers  unlike in Denmark, where windfarm owners have to pay for loss of value to property.

It found that the average annual increase in house prices around a 5km radius of the windfarms from the year before construction through to 2013 was 0.8%, compared to 0.5% for the county where the scheme was sited. "There was, in fact, a statistically significant positive impact  prices saw 2% higher annual price growth during the period after construction to the present day."

Data for the research came from the Land Registry, said the CEBR. But it excluded the results of house sales for properties located less than 2km away from a wind turbine, citing a lack of credible data. "Over a 19-year period there were, on average, just 68 transactions within 1km, and 723 transactions within 2km. This low volume meant it was not possible to create a reliable house price series for the 1km and 2km areas. It was therefore only possible to use data for the 5km area."

Of the seven sites studied, Kiln Pit Hill in Northumberland did show an initial "substantial downturn" in prices, but these later recovered.

RenewableUK, said polling showed two-thirds of the public in favour of windfarm developments. In February, electricity output from Britain's windfarms hit an all-time high of 11% of total supply.

A view from the residents

Chris Fiddes says he looks out over a Northamptonshire landscape "that could have stepped from the pages of Jane Austen". But plans by German operator Volkswind to plant five 375-feet high turbines within just 500 yards of his Regency-era home, won't just destroy his view, he says, they will also destroy the value of his property.

A local estate agent valued his home at around £400,000 before planning permission for the windfarm was given the go-ahead. "But afterwards, when I asked how much it was worth, he just laughed. He said it would be unsaleable," says Fiddes, 80, a painter who takes inspiration from his countryside location near the village of Crick. "The turbines are huge and completely out of scale with the landscape. Two other houses will also be seriously affected. The English landscape has always been the most important thing in my life. My wife was a great enthusiast for Jane Austen and it was she who found this house down a minor picturesque road."

Permission for the windfarm was initially refused by Daventry Council as "oppressively intrusive" but the decision was later overturned by the Planning Inspectorate, which handles national infrastructure issues. Volkswind argues that the Watford Lodge site "is not located in an area which is particularly sensitive in landscape or ecological terms."

Fiddes says he and other residents feel trampled over by the developers, who have offered no compensation and who he claims are turning his part of Northamptonshire into the "windfarm capital of England. If they had to pay the millions in compensation, that they should do, the whole industry would collapse," he says. Windfarm developers pay money into community benefit funds, but Fiddes says the amounts are laughably low. "It's the sort of thing that will pay for the redecoration of the village hall," he says. "This is going to make me a poorer man, but unfortunately neither I, nor the other residents, have the money for a high court action."

Several other owners told us their homes have been blighted by windfarms, but they are shy of being photographed because they fear the publicity would mean they were never able to sell.

George Matthews, who lives close to the Drone Hill windfarm, a complex of 22 225-foot turbines on the Scottish borders near Berwick, has been trying to sell his £500,000 home for three years.

"My mother has dementia, and I would like to move to be able to look after her, but we are stuck and can't get on with our lives. We can't sell it  we've had no offers. We have a beautiful home but the windfarm is putting people off. I asked for £100,000 in compensation, but they refused."

When he moved to the area eight years ago, there were no proposals to build a windfarm. He describes the community benefit fund  worth £40,000 a year for the next 25 years  as a "drop in the ocean" from an operator, AES, which is an American multinational worth billions.

AES says the fund is worth £1m in total and the electricity generated will provide power for 14,700 homes.