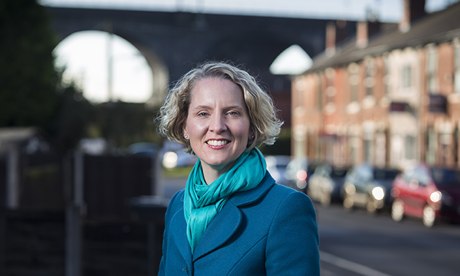 Labour's shadow housing minister Emma Reynolds must have been watching a lot of Kevin McCloud's Grand Designs. She's the latest politician to fall in thrall into the cult of self build.

Labour's latest plan is to encourage councils to sell off small plots of land to independent buyers and builders, to help young people access home ownership and to give small developers an opportunity to compete with the nation's major housebuilders. Reynolds wants to establish a waiting list for public land, from which councils should easily find buyers for the smaller sites they find difficult to sell on the open market.

In an interview with the Independent, Reynolds said: "At the moment all the political pressure is from those who own their own houses and have an interest in the status quo. But the people who are not getting a voice are those in their 20s and 30s who desperately want to own but can't get the deposit. Local authorities have a waiting list for social housing but they have no idea of the scale of the need for private housing. So what could you do to give these people a voice and ensure that councillors are also listening to them?" Reynolds also claimed that waiting lists for plots of land would also provide evidence of the sheer numbers "frozen out" of today's housing market.

She's saying the right things. This clever plan sounds like it tackles all three elements of the housing crisis: development numbers; dominance by major builders; the plight of Generation Rent. But it also exposes Reynolds' relative inexperience in housing policy; it is simply naive.

It does nothing to address the cost of land. The 'priced out' generation aren't only held back by slow development rates and a lack of mortgage finance  it's the fact that housing is becoming unaffordable due to rising land values. Unless Reynolds was able to convince public bodies to sell off their land at a discount (unlikely, as every penny must be squeezed from assets at a time when core public services are being axed) then this won't make much difference to affordability and access at all.

It's aspirational but simplistic to imagine that releasing land from the public sector will be as simple as drawing up a waiting list of need. Reynolds' comparison with the social housing waiting list is actually rather telling  neither are able to solve a housing shortage simply by demonstrating that it exists. Unlocked land has been a frustration for housing ministers for decades. Under this government, responsibility for releasing it has been passed to the Homes and Communities Agency, under the leadership of Andy Rose, along with £500m to help grease the wheels. Since his appointment last year, little more has been heard about it. Plus ça change.

Finally, this recurring obsession with self build is misplaced. Politicians love to parrot statistics stating that while only 10% of UK's new homes are self built, it is up to 50% among some of our European near neighbours. These comments usually follow a visit to the Dutch town of Almere.

But self build is never going to take off as a major movement in the UK. There simply isn't the cultural appetite or financial freedom to take on all that hassle. Europe can't be bothered either; the figures that are constantly quoted often confuse self build and custom building.

Custom building  where small developers take on medium sized projects on behalf of a community of buyers  is popular in Europe and could be an interesting tool to help increase housebuilding rates here in the UK. But until the price of land comes down, there's no incentive for anyone  buyers, builders, or otherwise  to get involved. And the only way to do that is by making more housing available through the traditional, large scale, government-led development schemes, complete with housing for social rent, shared ownership and outright sale.