Labour is offering to build 200,000 new homes a year, but how much will Ed Balls dare to borrow to build? 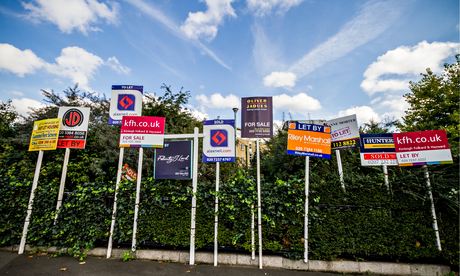 In a year property prices have risen 18% in London and 9.2% across the country. Photograph: Guy Corbishley/Demotix/Corbis

You know the world has gone mad when people go out to work in the morning and their house has earned more than they have by the time they get back at night. Here we go again, another mighty surge in property values, up and up, 18% in London, 9.2% nationwide, out of reach of ever more people as home ownership drops. Gazumping and even ghost gazumping, where there is no gazumper, sees houses changing hands at above asking price, as scores of frantic couples cram into mass viewings of squalid cupboards. Most will not get on to a "ladder" because they'll never afford to upgrade. When all else fails, the government creates a phantasm of success by deliberately inflating house prices. A bubble? Oh no, "this time it's different". It always is.

How do we feel about it, we homeowners? Property porn sells  why else are house price stories so avidly devoured? It shocks, it excites. Of course it's all wrong, yet that wicked calculation rushes through most minds  how much more? This government tickles that itching palm, though people know it's fool's gold. A recent YouGov poll for Shelter found two thirds of voters want house prices to be stable or to fall. Over-60s are even more adamant that price rises are bad for the country: they see how their children and grandchildren struggle to find anywhere to live, whether bought or rented.

But Conservatives play to low human impulses  and they talk up the boom as prices "strengthening". Asked if the price boom is good, Kris Hopkins, the housing minister, said "Yes!" on Newsnight. Feel good, go out and spend, is their pre-election message. As savings drop, Lord Turner, ex-head of the Financial Services Authority, warns this risks causing another financial shock.

Don't expect the politically appointed Mark Carney of the Bank of England to take action before the election, either by raising interest rates or curbing lending. He says he's ready to act if there's a risk of any housing bubble  but he sees no bubble. You can bet he'll keep his telescope to his blind eye until after May 2015. In his world of finance, the air he breathes tells him whatever is good for the Conservative party is good for the country. Housing will be at the heart of Labour plans, we're told  and it needs to be. We wait until autumn for the Lyons commission on how to build more. So far Labour's offer to build 200,000 new homes a year by the end of the parliament is not enough, and they know it. If 250,000 homes every year are needed just to keep up with annual rising need, that must be the minimum: Macmillan built more. Low-level housebuilding in the Labour years despite soaring prices is partly to blame, but this government is building even less.

Look at the enormity of this gigantic market failure. Median prices have risen five times faster than earnings since 1997, rents soaring faster still. For the first time in decades more families with children perch in precarious short-term rentals than live securely in social housing. A third of rented homes fall below a decent standard. Two million social homes are lost to right-to-buy, a third become buy-to-lets rented out at high cost to the housing benefit bill. How mad is that? Incentives for buy-to-let are higher than for any other investment: that's mad too. Developers hoard land, and even more is secreted away by untraceable middlemen.

What can an incoming government do? Building is key, but demand is so strong there's no chance of building fast enough to affect prices or rents for years to come, as Kate Barker found in her seminal 2004 housing review. So start by talking down prices, which are highly sensitive to rumour and expectation, says Toby Lloyd, Shelter's head of policy. Labour can frighten prices down by threatening to use whatever it takes to keep them stable, including taxation and cutting off borrowing, alongside a big build.

Rent controls were a cumbersome 1960s apparatus  but Labour is considering long leases with inflation-only rent rises. If three- or five-year leases are to be the norm, banks lending to landlords need to permit it  as only Nationwide does currently. Registering all landlords will catch the rogues: Shelter finds the worst-kept properties in high-price zones where desperate people put up with anything. This government calls 80% of market price an "affordable" home: Labour will set genuinely affordable house prices and rents. Right-to-buy now comes with a £75,000 discount: Labour needs to cut it, and make sure every council house sold is replaced, with shared ownership so councils can buy back homes.

The big question is how much will Ed Balls dare borrow to build? We won't know until the final costings in the manifesto. Shelter says EU rules allow councils to borrow off the public borrowing books to build  so why shouldn't we do the same? Stamp duty, says the OBR, is due to bring in £9bn: why not earmark it for housebuilding?

We under-tax housing, as wealth accumulates in bricks and mortar. Buy-to-let owners rarely pay any capital gains, escaping through plentiful loopholes. The mansion tax is popular  but, as it needs revaluation why not rebalance council tax and add many more bands so the best-off pay more, the poorest less? Northern Ireland has a 1% annual property tax, as do many countries  why not the rest of the UK?

But land prices are the key. Oxford economist and housing expert Professor John Muellbauer calls for a national land bank, the state acquiring land for garden cities or any building at current land use value and, once given planning permission, selling on to builders, keeping the windfall added value.

Labour needs to signal in everything it does that a house will no longer be a savings bank, a pension, a children's investment fund, but just a home, at a stable price. Building is a powerful Labour symbol for growth. Bubble-pricing is destructive, building is regeneration and jobs.

Don't underestimate the levers a government holds, the implied threats it can wield or the power in signalling its strong intent. This government is worse than laissez-faire, positively encouraging house price insanity. It affects a nothing-can-be-done fatalism about the dysfunctions of the housing market. But there is no need for the old to go on accumulating wealth while the young are crushed under killer prices. It wasn't always this way, and it need not be in future.