Could now be the worst possible time to buy to let? 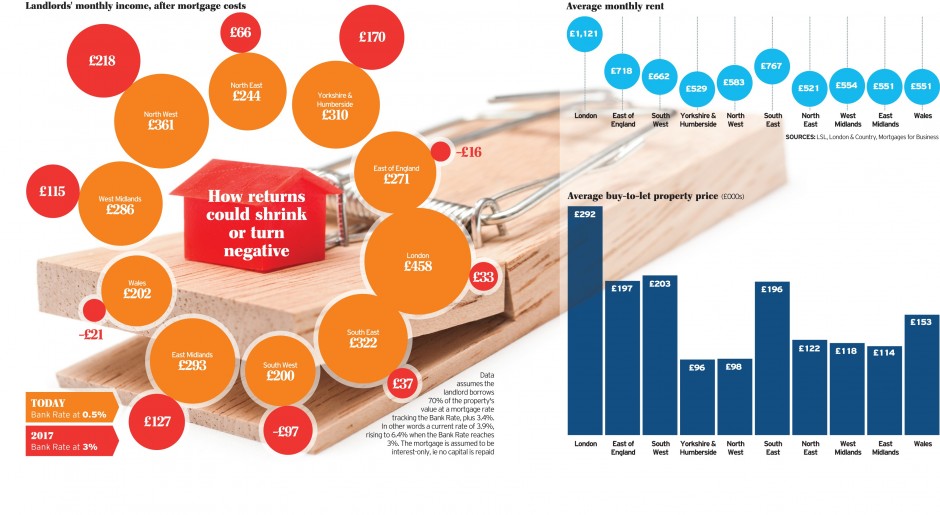 Could now be the worst possible time to buy to let?

The Governments sweeping reforms of the pension system  which abolish the need to buy annuities and allow savers free rein to invest or spend pensions as they wish  have led to speculation that money will flood into buy-to-let.

And many of Britains 1.4 million private landlords have indeed profited in recent years. Rising rents have been driven by a shortage of accommodation, especially around large urban centres, and by many peoples inability to get a mortgage.

But is now really the right moment to get into buy-to-let? One distinctly dark cloud on the horizon is the threat of rising mortgage rates.

Calculations by Your Money show how some  especially recent  buy-to-let investors could see their cash flow turn negative as early as 2017 if interest rates rose to the levels hinted at by the Bank of England Governor, Mark Carney. In other words, landlords rental income would fall short of their mortgage costs, triggering a monthly loss.

Most at risk would be those who have flocked lately into the market, or who have borrowed against their existing buy-to-let portfolio recently, with interest rates at all‑time lows.

There has been an astonishing resurgence of buy-to-let borrowing in the past 24 months. In the two years between the end of 2011 and the end of 2013, mortgage lending to landlords grew by 44pc, according to the Council of Mortgage Lenders.

The number of property purchases financed by landlord loans rose from 6,200 in 2011 to 9,300 last year. Rates on landlord mortgages, which lenders are clamouring to advance, are now lower than they were in the buy-to-let boom years of 2005 and 2006.

What will happen when rates rise? Earlier this month, speaking about a return to normal for interest rates, Mr Carney said the current Bank Rate  0.5pc since March 2009  could rise sixfold to 3pc as early as 2017.

Even at 3pc, Bank Rate would be historically low.

The data in the graphic, above, is based on actual rents received for approximately 20,000 let properties across England and Wales. This rental data is collected by property group LSL through its chains of lettings agencies, and then matched against average property values by region.

The calculations assume that a buy-to-let investor has borrowed 70pc of the property value on an interest-only loan at what is today a competitive landlord mortgage offer: Bank Rate plus 3.4pc.

This means that with Bank Rate today at 0.5pc, the mortgage currently costs 3.9pc. If Bank Rate rose sixfold to 3pc, this mortgage rate would more than double to 6.4pc.

The data across the two graphics shows how an average landlords post-mortgage income would plunge, or in some cases turn negative, if mortgage rates rose along the lines indicated. The assumptions and underlying information are shown to the right. In London, for example, the average buy-to-let property has a value of £291,500 and attracts a monthly rent of £1,121. An interest-only mortgage on 70pc of the property value (£204,050) at a rate of 3.9pc costs £633 per month, leaving an income for the owner of £458. But a mortgage rate of 6.4pc would cost £1,088 to service per month, dragging the post-mortgage return to the landlord to just £33 per month.

The calculations are theoretical. They assume no increase in rent. They also assume the landlord remains on a tracker-style mortgage which rises in line with Bank Rate, rather than switching to a cheaper deal which might  hopefully  become available. On the other hand, the calculations do not make any allowance for landlords other property expenses and void periods when the property is unlet.

Rents are likely to rise to some extent over a two-year period, but no one expects them to be able to keep pace with mortgage rate rises if Bank Rate merely doubles or trebles to 1pc or 1.5pc  let alone leaps to 3pc in the scenario outlined above.

David Whittaker of Mortgages for Business, a specialist landlord mortgage broker, said a rent ceiling had been reached in many parts of the country. Increased house building will keep the ceiling in place  or bring it down. Mr Whittaker said: Rents will not rise at the same speed as Bank Rate. The result would be that landlords in some regions would be vulnerable to cash flow troubles. This is borne out by other data that shows how yields  worked out by setting rental income against a propertys price, and not factoring in any mortgage costs  have fallen or remained static over the past year in every one of the 10 regions shown in the graphic. In four  London, the East of England, Wales and the South East  the average yield is now below 5pc. In the South West the yield is 3.7pc.

How landlords can keep their mortgage costs under control

Buy-to-let mortgages differ from owner-occupier mortgages in several ways. They are regulated differently and lenders tend to apply stricter criteria before agreeing the loan. This means they are likely to assess rental income generated from the property and, increasingly, any other income you may have. The charges are also different, often higher than on owner-occupier deals, with an upfront charge typically levied as a percentage of the whole mortgage. This can add substantially to the cost and is a deterrent from remortgaging.

As with owner-occupiers, switching to a fixed-rate mortgage offers protection from future rate rises. But how long to fix? Although the Bank of England Governor, Mark Carney, has envisaged a scenario in which rates could reach 3pc by 2017  and that would still be far lower than their long-term average  most economists expect rates to move more gradually, starting next year. Earlier this week Deutsche Bank brought forward the date at which it expects rates to start rising to May 2015, and predicted that Bank Rate would end 2015 at 1pc.

Two-year fixed rates are available to landlords from as little as 2.5pc (for borrowers with deposits of 40pc). But if rates do start rising next year, and continue to climb into 2016, a two-year deal may offer inadequate protection. This is because the fixed rate could end just as rates start to rise. Current five-year fixes charge from 3.7pc, with rates increasing to about 4.5pc when the lender demands lower upfront fees or if the deposit is smaller. Most lenders will not advance more than 75pc of the propertys value. Some will occasionally stretch to 80pc, but at far higher rates.

You can also obtain tracker rates, where the rate paid rises and falls in line with Bank Rate. At the moment a lifetime tracker charges Bank Rate plus 3.38pc. Trackers are controversial with landlords, however, as some lenders  including Bank of Ireland and West Bromwich  have sought to change the margin over Bank Rate at which they track. Disputes over these changes are still ongoing.

As yields  calculated by putting rental income against the price of a property  come down, it gets harder to borrow a high proportion of a propertys value because lenders typically require mortgage rental cover of 125pc. In other words, the monthly rental income needs to be 25pc more than the cost of the mortgage (on an interest-only basis). This means buyers with small deposits in areas where values are high and rents comparatively low are potentially squeezed.

Take a landlord borrowing 75pc of a property price of £300,000, or £225,000. Monthly payments come to £844 (interest only) so the lender would need to be convinced that rent of at least £1,055 could be obtained. For existing properties being remortgaged, the lender would need evidence that this level of rent was already being achieved.

For new purchases, the lenders surveyor would assess the likely rent achievable, as well as the propertys value.

Owner-occupier mortgages came under the regulation of the watchdog in 2004. But landlord mortgages are treated as business loans, so are not regulated in the same way. This brings some benefits to landlords. In particular, some are allowed to borrow on an interest-only basis, where their monthly repayments merely service the interest. This has been all but barred for owner‑occupiers.

This is of use to landlords as the cost of interest is tax-deductible. But by not being regulated in the same way as the owner-occupier market, lenders have more powers if borrowers default. The forbearance which the Government urged lenders to exercise when home owners fell into arrears during and following the recession did not apply to landlord lenders.