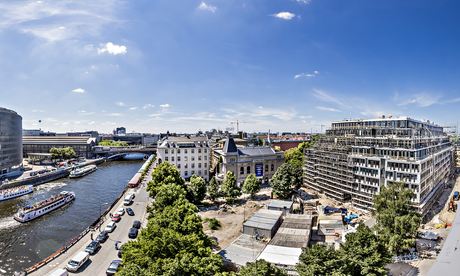 A few yards from the Berliner Ensemble theatre, which he helped to found in 1949, Bertolt Brecht sits on a chair, gazing with a wry smile over the river Spree. It's a shame that the bronze statue can't move, because it would be interesting to see what the Marxist playwright would have made of the building site behind his back.

On the northern side of Brecht's square, workers are putting the finishing touches to the most extravagant building project in the German capital: a nine-floor residential block in Mitte district conceived by the British property developer John Hitchcox and French designer Philippe Starck, with wide balconies, a red-leather-clad lobby and a spa area decorated with glass chandeliers. A concierge will do "anything from booking their flights to putting cartons of milk in their fridges", as the sales manager Alexander von Albert sells it.

The building complex, called Yoo Berlin, is set to open in the summer  90 out of 95 flats have already been sold. The penthouse at the very top, which went for 4.1m, is being touted as the most expensive in the city.

Currently, Berlin's priciest flat is a bit of a mess, as the owner has decided to rip out the work already done and bring in his own designer. Strolling through the debris, Hans-Peter Koopmann, who manages publicity for the development, points out sights on the horizon: "That's the Reichstag, there's the Victory column, and from this angle you can look straight into Angela Merkel's living room." No other residential properties will obscure its new owners' view: the district council specially lifted a ban on high-rise flats for Yoo.

Compared with London prices, 14,137 per square metre may not sound much  residents of One Hyde Park are willing to fork out four times the amount  but it certainly puts a lie to the first half of Berlin's self-assigned catchphrase "poor but sexy".

Looking at the capital from up here, a line from Brecht's The Threepenny Opera, which long ago premiered at the Berliner Ensemble next door, sounds a more appropriate motto: "Listen closely to Mack the Knife / the bulging pocket makes the easy life."

Attitudes to property are changing in Germany, especially so in the three biggest cities  Munich, Hamburg and Berlin. Over centuries, the capital fostered a reputation as a renter's paradise, where tenants paid little and were well protected by the law. In 2011 only 16% of Berliners owned their own place, compared with 50% in London.

But rents are rising quickly in Berlin, at almost twice the national average rate. At the moment they may still be half of those in Munich, but Nikolas Jeissing, head of the commercial branch of estate agents Engel & Völkers, suggests the capital will eventually catch up. "In the long run I imagine that it will be more expensive to rent in Berlin than in Munich," she says.

The German coalition government may be planning to introduce rent controls in the bigger cities, but Jeissing believes they will only "slow down the trend, not stop it". Increasingly some young families are forced to calculate if they would not be safer buying their next flat than renting precariously.

In addition, with interest rates remaining low across the eurozone, a nation that traditionally saves a tenth of its income has had to learn to look elsewhere to park its savings. And with the economy still unstable elsewhere in Europe, German property has begun to look safer than ever: betongold  "concrete gold", some in Germany call it, though Koopmann of Yoo quibbles with the term. "Gold is actually quite a volatile investment  property in the centre of Berlin, on the other hand, is as safe as it gets."

Half of Yoo Berlin's buyers are foreign investors, from Britain, America, France and "very few Russians". Many of them already own "a flat in London, maybe an apartment in Singapore", said sales manager Von Albert  many of the flats behind Bertolt Brecht are likely to remain empty for most of the year.

But whether foreigners are the main drivers of Berlin's betongold boom, as some analysts have claimed, is questionable. Agencies may now rank Berlin in third place on the European investment market, after London and Rome, and the parents of Spanish, Italian or Greek twentysomethings may be more familiar with the German capital than they were a decade ago, but Jeissing of Engel & Völkers puts foreign investors' share in the retail investment rise at roughly 30%, considerably down from before the financial crisis.

"The big Anglo-Saxon investors like Goldman Sachs discovered Berlin in around 2004, but now they are increasingly retreating and are more likely to look at Spain or Greece," she says.

James Guerin, the Irish CEO of Berlin-based Natulis property group, agrees: "Even though a lot of money is flowing into the city in the form of property purchasers from countries where the local economy is weak, like Greece, Italy, Spain, this is not having a big impact on the business here except for some luxury projects. In fact, there were more foreign buyers in the mid-90s."

Guerin's company is building flats on the site of a ruined old factory, on Scharnhorststrasse north of the central station. Only 10% of his buyers come from abroad. Most of them are upper-middle-class Germans, many of whom are buying property for their children.

Walking around the building site, looking at the cranes working on the open spaces nearby, there is a sense that Berlin is busy closing up remaining gaps. "Time is running out to buy in Berlin," Guerin says. Once all the empty plots are built on, will Berlin go the way of Paris or London, with amateur developers doing up older properties to sell for a profit and the poorer part of the population being pushed out to the suburbs?

Film-maker Katrin Rothe has personal experience with aggressive developers. In her award-winning 2013 documentary Betongold, she recorded her struggles with a landlord who was trying to push tenants out of their block of flats to make way for buyers. By the end of film, Rothe gave in to the pressure and found herself wondering whether home ownership may not be the future for Berlin residents.

Talking to her now, she sounds reinvigorated. "In the end I decided that it's worth fighting for cheap rents in Berlin. This city has a history of doing this differently. We should heed the warning of the Spanish property crash: if you buy property, you can quickly lose a sense for the real value of a home," she says.

Even James Guerin agrees that exponential increases comparable with those in London are unlikely. "Germans are more prudent in property purchasing. There is no property ladder here. They tend to buy later in life and hold their properties long term. It's primarily a home and secondarily an investment."

Most German banks require around 20% deposit and tend to offer 10-year fixed interest rates, which deters buyers from reselling after a few years. Unlike Britain, Germany still has a strong tradition of local associations that offer legal advice to tenants. Tenants' rights are still stronger than those of buyers, so that investors who buy occupied flats could well find themselves not being able to make use of their new acquisition.

"I am hopeful that the idea of property as a social service rather than an asset is embedded in Berlin's mentality," says Reiner Wild of the Berlin tenants' association. "We'll do our very best to make sure that our city doesn't go the way of Paris or London."