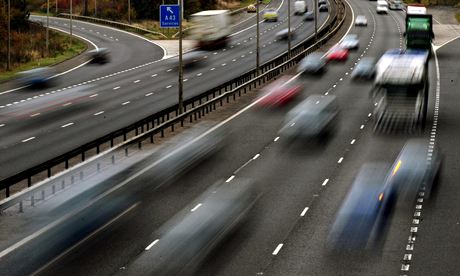 Traffic on the M1 motorway. Labour has sought to focus pre-election sparring on a 'cost of living crisis'. Photograph: Rui Vieira/PA

Inflation fell to its lowest level in more than four years last month, easing the burden on households after years of squeezed incomes.

A let-up in petrol price rises helped inflation fall to 1.6% in March from 1.7% in February on the consumer price index (CPI) measure, according to official data. The rate, widely forecast by economists, was the lowest since October 2009 and well below the Bank of England's government-set target for CPI at 2%.

The news comes a day before labour market figures on Wednesday are expected to confirm that wage growth has finally overtaken inflation, giving workers their first real pay rise since the coalition came to power in 2010.

The Office for National Statistics (ONS) said the gap between average wage growth and inflation was now at its narrowest since April 2010, and that the last time this had happened was in mid 2008.

Chancellor George Osborne seized on the inflation numbers as evidence his policies to turn the economy around were working.

"These latest inflation numbers are welcome news for families. Lower inflation and rising job numbers show our long term plan is working, and bringing greater economic security. But there is still much more we need to do to build the resilient economy I spoke of at the budget," he said in a statement.

But Labour, which has sought to focus pre-election sparring on a "cost of living crisis", counters that millions of people are not feeling any recovery.

Writing in the Guardian today, shadow chancellor Ed Balls said people will not buy talk of the crisis being over.

"Because for most families in Britain today such a declaration, on the back of a handful of economic statistics, will only confirm just how out of touch this government is," he said.

His argument that people are struggling with high and rising housing costs was supported by official data this morning that house price inflation rose to its highest level in almost four years.

The ONS said UK house prices rose by 9.1% in the year to February, up from 6.8% in the year to January 2014. House price growth was "increasing strongly across most parts of the UK", it added, with prices in London again showing the highest growth. Prices in the capital were up 17.7% on the year.

The inflation figures showed that the retail price index (RPI) measure, which includes housing costs and is used to set many pay deals, fell to 2.5% from 2.7% in February, as forecast by economists in a Reuters poll. That was the lowest since December 2009.

Economists said the slowdown in inflation would be welcomed by Bank of England policymakers amid growing speculation they may have to raise interest rates sooner than next spring as house prices accelerate and the economy picks up steam.

"Clearly below-target inflation facilitates the Bank of England keeping interest rates down at 0.5% where we believe they are highly likely to stay through 2014 and during the early months of 2015 despite the economy's improved growth and markedly reduced unemployment," said Howard Archer, economist at IHS Global Insight.

"While encouraged by the economy's recent stronger performance, the Bank of England is still not taking sustained recovery for granted and very much wants to see growth become more balanced."

"In any case, it is the inflation outlook that really matters. There is every chance inflation will pick up as economic slack is eroded."

Looking ahead, economists pointed out that noted much of March's inflation drop will be reversed next month when distortions from Easter drop out. The holiday fell in March last year but is in April this year.

"This is likely to mark the low-point in UK inflation. Next month should show a rebound as petrol price inflation becomes less negative and the impact of Easter holidays pushes up on airfares," said Alan Clarke at Scotiabank.

There was also little evidence of pipeline pressures on inflation in separate data from the ONS on producer prices. Their output prices, also known as factory gate prices, were up 0.5% on the year. That was ahead of forecasts for 0.3% but still the lowest since October 2009. Producers' input prices, or the materials and fuel costs they face, were down 6.5% on the year, bigger than forecasts for a 6.1% drop and the deepest deflation since September 2009.