Average house price in London nears £500,000 as market forges ahead on back of housing shortages and Help to Buy 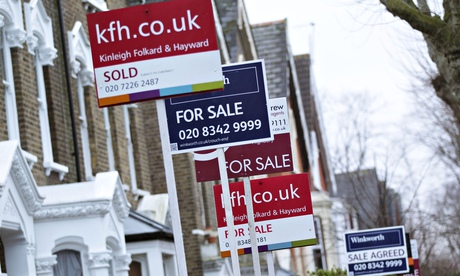 The average cost of a UK home is now £254,000, according to the Office for National Statistics. Photograph: Yui Mok/PA

House prices continued to soar in January, with their annual rate of inflation leaping to almost 7%, according to official figures published on Tuesday. The average cost of a UK home rose to £254,000, the Office for National Statistics said.

Growing demand from buyers  fuelled by government schemes to help borrowers and increasing confidence in the economy  and a continued shortage of properties for sale are driving rises in all parts of the UK. The average house price in January was 6.8% higher than a year earlier, up from a 5.5% increase in December.

Growth is still being driven by London and the south-east, which saw annual growth of 13.2% and 7.1% respectively, pushing prices to above their 2008 peaks. In the capital, the average price rose to £458,000  three times the £147,000 recorded in the north-east of England. If sales in London and the south-east were excluded from the overall picture, the rate of house price inflation across the UK would drop to 3.8%.

In England and Wales, prices rose by 7.1% and 6.9% year on year respectively, while in Scotland values were up just 1.4%.

Peter Rollings, head of London estate agency Marsh & Parsons, said: "Unwavering demand from UK and overseas buyers is a key ingredient behind this rate of growth, and prime London property continues to be a mecca for property investment."

The ONS figures, which are based on completed mortgages, showed that for first-time buyers, who have benefited most from the government's Help to Buy scheme, the average price paid rose by 7.6% over the 12 months to January, to £190,000. This was higher than the 6.5% increase for home movers, although they paid an average of £291,000 for their new home. With the 3% stamp duty threshold unchanged in the budget, movers are now typically paying the taxman almost £9,000 when they complete.

William Zimmern, a senior economics consultant at PwC, said he expected prices to continue their upward trend this year, with the UK average set to reach £264,000 by the end of 2014 and prices in London possibly breaking the £500,000 barrier. "Our research indicates there seems to be little evidence to suggest a house price bubble at the UK level," he said. "However, the London picture is more mixed. While credit growth seems relatively cautious, concern will grow if price to earnings ratios and mortgage repayments as a portion of income continue to grow and diverge from the rest of the UK."

The ONS figures came as Britain's banks reported that approvals for house purchases were up by more than half year-on-year, and builders said the UK needed 1m more homes to keep up with demand. Figures from the British Bankers' Association showed that gross mortgage lending was up by 47% year on year in February at £11.5bn, and had reached its highest level since August 2008. The number of loans approved for house purchase was up by 53% at 78,424.

Meanwhile, 10 years after a government-commissioned report recommended that 210,000 homes needed to be built each year to keep a lid on prices and avert a housing crisis, the Home Builders Federation (HBF) said a "lost decade" meant the shortage was now equal to the number of homes in Birmingham.

In 2004, economist Kate Barker outlined a range of options for the housing market. She said that to keep prices within households' reach, annual price inflation needed to be limited to 1.8%, which would require 210,000 new homes to be built each year. To improve affordability for households, inflation would need to be kept at 1.1%, which would require 260,000 new homes a year.

Instead, over the past decade an average of just 115,000 homes have been built annually by the private sector, according to the HBF, with the recession and the freeze on mortgage finance during the credit crunch contributing to the low levels of building. The shortfall over the decade between the figure Barker proposed to keep price inflation at 1.8%, and the number built, now stands at an estimated 953,000 homes.

The group said the Help to Buy equity loan scheme, introduced in April 2013 to offer an interest-free loan to buyers of newbuild homes, had started to drive demand and increase supply, but from a low base.

Barker added: "The continued shortfall in housing supply matters most to those who lose out in the battle for dwelling space. At the moment the cost is falling heavily on many families in the private rented sector. It is vital to raise the rate of new supply  but also to develop coherent policies to address the consequences of the supply shortfall."

The housing minister, Kris Hopkins, said housebuilding was an essential part of the government's long-term economic plan."We're now building at the fastest rate since 2007, and eight out of 10 planning applications are now being approved," he said. "But there is still more to do, and improving the housing market will remain a top priority. It is now essential councils get their local plans in place so we can build more homes, create jobs and ensure every hard working family has a place they can call home."