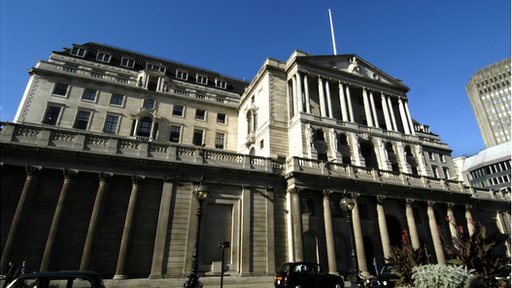 Eight UK banks and building societies will face so-called stress tests, to assess their resilience to an economic downturn, the Bank of England has announced.

The test will measure the impact of a "very severe housing market shock" and a sharp rise in interest rates.

That scenario will include unemployment rising to 12% and house prices falling by up to 35%.

The Bank said the tests would ensure the UK financial system's resilience.

After missing disastrous housing booms and busts in the past, the regulators this time appear to be saying: 'We're watching and we will act. Honest'

Governor Mark Carney said "the events depicted in this stress-test scenario are extreme, and thus highly unlikely to transpire".

Nevertheless, he said they would "ensure that the UK financial system remains one that absorbs rather than amplifies shocks".

The scenario also includes a collapse in the value of sterling, GDP falling by 3.5% below its level at the end of 2013 and consumer prices index (CPI) inflation rising to 6.5%.

Under these conditions, the Financial Policy Committee (FPC) will decide whether the eight banks would remain solvent.

If not, they could be ordered to increase their capital reserves.

The banks and building societies involved are:

Under the European tests, they will be expected to prove they can survive a 7% drop in GDP.

The EBA says banks should also be able to withstand a 14% fall in house prices and up to a 19% drop in share prices under a worst-case scenario.

The regulator said the tests would "address remaining vulnerabilities in the EU banking sector".

"It will provide a common framework for the next stops to be taken by supervisors and banks," said European Banking Authority (EBA) chair Andrea Enria.

The tests are much tougher than the EBA's 2011 stress tests when it projected a worst-case scenario of just a 0.5% fall in GDP.

At the time, the tests were widely criticised for being too soft, particularly after 18 of the EU's 27 countries at that time had weaker growth than the "adverse" case they were tested for.

"The key is that the scenario is at least as deep and dark as the great recession, the financial crisis of 2008-09," said Mark Zandi, Philadelphia-based chief economist at Moody's Analytics.

Banks that fall short of capital under the EBA's worst-case imagined scenarios will have to produce a plan to boost their reserves by raising fresh funds from investors, selling assets or hanging on to profits instead of paying dividends.

European banks have already made several reforms, including raising billions of capital ahead of the latest tests.

"What we're looking for is relevance of the scenarios, do they address what we believe is the risk on the ground?" said Neil Williamson, head of EMEA credit research at Aberdeen Asset Management.

The EBA will publish its results in the last three months of 2014, with the Bank of England producing its report "towards the end of that quarter".