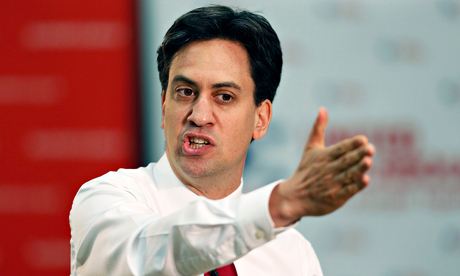 Ed Miliband will say that a Labour government will take action to deliver a fairer deal for the nine million people living in rented homes. Photograph: Murdo MacLeod

A future Labour government would ban landlords from evicting tenants as a quick way of increasing rental income, Ed Miliband will announce on Thursday as he outlines the most far-reaching changes to the rental market in two decades.

In a policy designed to be one of the most eye-catching elements in his campaign to tackle the "cost of living crisis", the Labour leader will pledge to introduce three-year tenancy agreements with strict rules to make it more difficult to evict tenants.

Pledging to champion Britain's overlooked "generation rent", he will say he would introduce a mechanism to place a ceiling on rent increases. He will also ban letting agents from demanding fees from tenants that can be as much as £500.

Speaking at the launch of Labour's European and local election campaign in Redbridge, Miliband will say: "Generation rent is a generation that has been ignored for too long. Nine million people are living in rented homes today, over a million families and over two million children. That is why a Labour government will take action to deliver a fairer deal for them, too."

Miliband has made clear in recent weeks that while reform of the rental market would mark the next stage in his cost-of-living campaign, his plans would stop short of rent controls. But Grant Shapps, the Tory chairman, accused the Labour leader of planning to introduce "Venezuelan-style rent controls".

Labour sources were adamant that their reforms do not amount to the blunt instrument of rent controls because the market will still set the rent. The Labour plans would give tenants security, with a three-year tenancy agreement to allow them to plan ahead, with predictable rent.

The Miliband plan, modelled on reforms introduced in the Republic of Ireland, will have three main elements:

 New three-year tenancy agreements that would start with a six-month probationary period allowing landlords to evict a tenant if they are in breach of their contract. This would then be followed by a two-and-a half-year term in which tenants would be able, as they are now, to terminate contracts after the first six months with one month's notice.

Landlords would only be able to terminate contracts with two months notice if a tenant fell into arrears or was guilty of anti-social behaviour; or if the landlord wanted to sell the property or needed it for their family. This is designed to prevent landlords from terminating tenancy agreements to put up rent.

 A new formula to prevent excessive rental increases. Labour will be guided by the Royal Institute of Chartered Surveyors, which is examining options for a new benchmark. This could be linked to average rent rises, inflation or a combination of the two.

 Ban letting agents from charging tenants fees just to sign a tenancy agreement. They will instead have to ask landlords for fees.

Miliband decided to act after a 13% rise in the average costs of rent since 2010. He will say: "One of the biggest causes of the cost of living crisis in our country is the price of renting or buying a home. People simply can't afford it, they're priced out, saving for a deposit year after year, decade after decade, or having to look for somewhere to live further and further away from where they go to work or where the kids have always gone to school."

Shapps said: "This is another short-term gimmick  political tampering from Ed Miliband. Evidence from Britain and around the world conclusively demonstrates that rent controls lead to poorer quality accommodation, fewer homes being rented and ultimately higher rents  hurting those most in need. And it's yet another Labour policy bought by Ed Miliband's union boss, Len McCluskey."