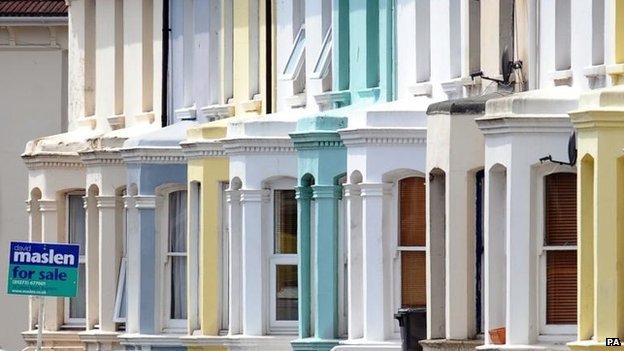 Price increases are predicted in all areas of the country, the report says

A shortage of homes coming onto the market will lead to house price rises, with values expected to grow for years, according to surveyors.

Demand from buyers rose, but the number of homes coming onto the market fell for the fourth month in a row in April.

Meanwhile, an ombudsman said complaints about legal services when buying a home topped the list of legal gripes.

Adam Sampson, chief legal ombudsman, said that one in five complaints made to his office last year were about legal conveyancing.

In the Rics survey, the majority of surveyors said they expected to see house prices rise in all areas of the UK in the coming months.

On average, surveyors expected average price growth of 6% a year over the coming five years.

In the short-term at least, this was result of the imbalance between the supply of homes and demand.

However, prices dropped by 0.2% in April compared with March.

Stephen Noakes, mortgages director at the Halifax, echoed the view of an imbalance between supply and demand.

The supply of properties was "slow to respond to market conditions", he added.

The year-on-year comparison is calculated slightly differently by the two lenders. The Halifax compares the previous three months with the same three months a year earlier to give a smoother comparison, rather than a direct comparison of the equivalent months as calculated by the Nationwide.

Earlier in the week, economic forecaster, the OECD, said that property prices were soaring when compared with rents and household incomes.

It said "timely measures" could be used to stop the market overheating, suggesting that restrictions were put on the government's Help to Buy mortgage guarantee scheme.

Subsequently, three former chancellors told the Financial Times that they had concerns about Help to Buy's effect on the housing market.

Lord Lawson, Lord Lamont and Alistair Darling suggested that the scheme, which helps those only able to offer a small deposit, should be scaled back.

House price rises, and increased housing market activity, in the last year has been driven by the market in London and the South East of England.

These are also the areas where the highest proportion of complaints about legal services during the house buying process were made - with 22% in London and 17% in the South East.

Overall, there were 1,500 complaints made to the ombudsman that led to investigations in 2013-14, compared with about 1,200 the previous year.

Slow payment of stamp duty had been a particular issue, the ombudsman said.

The ombudsman investigates complaints about lawyers in England and Wales when a legal firm and the customer cannot resolve the matter between themselves.