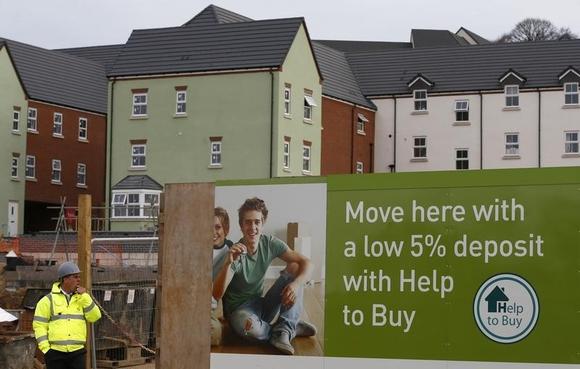 A builder stands by a ''help to buy'' advert on a Barratt Homes building site in Nuneaton, central England March 20, 2014. REUTERS/Darren Staples

(Reuters) - British house prices rises slowed somewhat in April, a survey showed on Thursday, tempering a surge in property values that has stirred talk of a bubble and raised concern at the Bank of England.

The Royal Institution of Chartered Surveyors' (RICS) seasonally adjusted house price balance eased last month to +54 from +57 in March, below a +56 forecast in a Reuters poll, though it remains close to November's 11-year high of +58.

The survey contrasts with data from mortgage lender Nationwide last week which showed British house prices posting their biggest annual rise since the start of the financial crisis in April.

Both house prices and broader market activity rose in every area of Britain, with RICS members saying they were at their busiest since February 2008.

"House prices in general look set to remain firmly on the upward trend, although interestingly, there are some tentative signs that the price momentum in the London market may begin to slow in the second half of the year," said RICS chief economist Simon Rubinsohn.

Record-low interest rates and government-sponsored schemes have fuelled the recovery in housing and the rebound has been led by London where property also attracts foreign investors.

April's data showed the recovery was spreading across regions. House prices rose the most in East Anglia and the South East over the past three months, with London lagging behind.

After a strong second half to 2013, the data showed less of an increase in agreed sales in London than most other regions, which Rubinsohn said may reflect dwindling stock.

The robustness of the housing market has buoyed consumer confidence a year before general elections but has also raised questions about the BoE's ability to prevent a property bubble.

Chief economist Spencer Dale has said the central bank "should be nervous" about the housing market, and deputy governor Jon Cunliffe said it would be "dangerous" to ignore its momentum.

While officials will probably first try targeted measures to curb any overheating, rather than hiking interest rates, the issue is likely to feature in the two-day monetary policy meeting which started on Wednesday.

The BoE is expected to keep interest rates unchanged at a record low of 0.5 percent on Thursday.