April was the fourth consecutive month to experience a fall in properties coming on to the market, according to RICS survey 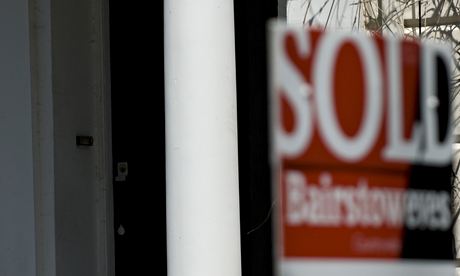 'Everyone hoped for a spring bounce in the number of homes being put on the market, but it hasn't happened,' say Rics chief economist Simon Rubinsohn. Photograph: Charles Fox for the Guardian

April was the fourth consecutive month to experience a fall in properties coming on to the market, according to a survey by the Royal Institution of Chartered Surveyors (Rics). But buyer inquiries are starting to fall in London amid "tentative signs" that the market in the capital is cooling.

Rising UK prices remain the overarching trend outlined by the professional body for surveyors and estate agents. Without a steep increase in the number of sellers willing to put their homes up for sale prices are likely to maintain the rapid rise that began last spring. The most recent house price survey by Nationwide showed prices rising by almost 11% across the UK and 18% in London.

The Rics report comes a day after warnings from the Organisation for Economic co-operation and Development that the rampant housing market threatens to destabilise the UK economy and that the government should consider further measures to restrain price inflation.

A deputy governor at the Bank of England, Sir Jon Cunliffe, said last week that it would be dangerous to ignore the momentum building up in the housing market.

Simon Rubinsohn, chief economist at Rics, said: "Everyone hoped for a spring bounce in the number of homes being put on the market, but it hasn't happened. If you look at five of the last seven months, we have seen a negative reading from our survey, which means more of our members are seeing falls in the number of new instructions than there are members who see an increase."

Rubinsohn said that despite the downward trend in instructions, the average number of homes sold per chartered surveyor hit its highest level since February 2008. The Rics residential market survey for April found that 26% more chartered surveyors reported an increase in the number of agreed sales.

The report showed that nine UK regions reported declines in new property coming on to the market. In the north-west, 62% more chartered surveyors predict prices over the next three months will rise, rather than fall. In East Anglia the figure is 57%. By comparison in London, 49% more respondents reported similar expectations, down from 61% in March.

Rubinsohn said all regions were buoyant and seeing price rises, though the strength of the London market was starting to wane.

"It's interesting that buyer inquiries are starting to fall in the capital. I wouldn't overplay this. The London market is still very strong and they are just tentative signs at the moment, but it is something we are starting to see," he said. "It's not clear yet whether buyers are suffering from affordability constraints after a period of strong price rises, hitting tougher lending rules or just looking around and seeing less property available and delaying their buying decisions."

Richard Batley, a senior analyst at economic consultancy Lombard Street Research, said it was possible the dearth of homes coming onto the market was due to older homeowners planning to downsize and hanging on for higher values.

"It was obvious from Cunliffe's remarks that most people are moving because they are coping with life changing events. Those who are thinking of selling to maximise value can see the market rising and are biding their time," he said.

Much of the debate around increasing the supply of homes has focused on newly built properties. The supply of new homes has increased dramatically in the last year, but still remains on a relatively small scale in relation to demand.

Rubinsohn, said: "The critical issue for the market remains the lack of second hand supply with our numbers suggesting that the picture is, if anything, getting worse.

"It is too early to conclude whether this will undermine the positive trend in transactions volumes, but clearly the absence of properties to buy will ultimately be a factor in influencing the ability of people to move home."