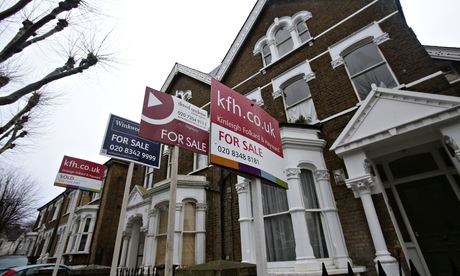 For sale signs in Finsbury Park, north London: the CBI expects house prices to rise by 8.2% this year and 5.1% in 2015. Photograph: Yui Mok/PA

Britain's leading business lobby group has warned that policymakers must be ready to act on unsustainable house price rises in the UK.

The CBI said it was on high alert after annual house price inflation reached more than 10% in some areas. It now expects interest rates to rise in the first three months of 2015, six months earlier than it previously predicted and, crucially, before the general election.

John Cridland, the group's director-general, said: "We have to remain alert to the risks posed by unsustainable house price inflation, and the [Bank of England's] financial policy committee is poised to act when necessary.

"Housing has come back under the spotlight as annual house price inflation figures have reached double digits on some measures. While housing transactions are still running almost 30% below their last peak in 2006, they are picking up steadily."

The CBI warned that "loose talk" and anti-business rhetoric in the runup to next May's general election risked damaging investment and derailing the recovery.

"The UK now has more stable economic foundations, and political risks must not jeopardise this. Politicians must be wary of the risk of headline-grabbing policies that weaken investment, opportunity and jobs," Cridland said.

"We've got a combination of political risks that we've not had for some while. They range from UK general election to Scottish referendum on independence to the prospect of a referendum on European Union, so that's quite a cocktail of issues."

He said the message to all parties was to stick with what's working, including a commitment to cut the deficit.

Cridland said the government's controversial Help to Buy scheme  blamed by some for creating a new housing bubble  was not responsible for unsustainable rises in house prices, arguing it was a relatively small part of the overall market.

"Help to Buy is primarily helping people outside London, on relatively modest mortgages, and appears very much still to be helping first time buyers. Those were the CBI's core objectives."

He said it was important to remember that although London prices were 25% above the 2008 peak, in part fuelled by rich cash buyers, prices in the rest of the UK were still 2% lower.

The CBI chief said bold action was needed from government to address the chronic shortage of houses in the UK, so that supply had a chance of keeping up with demand. The CBI wants to see councils releasing more land, and the possibility of new garden cities to be explored by policymakers.

Meanwhile, Katja Hall, the CBI's chief policy director, said the warning on anti-business policies was meant for all parties but admitted Labour's pledge to freeze energy prices and the hard line on banks were concerns.

"Some of the loose language we've heard is from politicians from all parties. Of course there is concern about the proposed energy freeze and some of the proposals on banking.

"Political positioning must not be allowed to stifle investment, whether it's an unrealistic immigration target, unjustified interventions into specific markets, flirting with leaving the European Union, delaying vital long-term infrastructure projects or restricting labour market flexibility."

The CBI wants a commitment before the election from all parties to the recommendations made on increasing the UK's airport capacity in the Davies commission.

The group predicts that unemployment will fall further to 6.8% this year and 6.4% next year, from 7.5% in 2013. Hall said the UK labour market was "looking really healthy". She said last summer marked a turning point, with a big increase in full-time permanent employment, after a period when self-employment, part-time work, and temporary work were factors driving a rise in employment. She also made the case for zero-hours contracts, where employees are not guaranteed a minimum number of hours.

"They are not bad contracts, they are an important part of a flexible labour market and they have helped to protect jobs during the recession, and create jobs as the economy started to recover," she said.