A man walks past a row of houses in Chelsea in London August 13, 2013. REUTERS/Andrew Winning 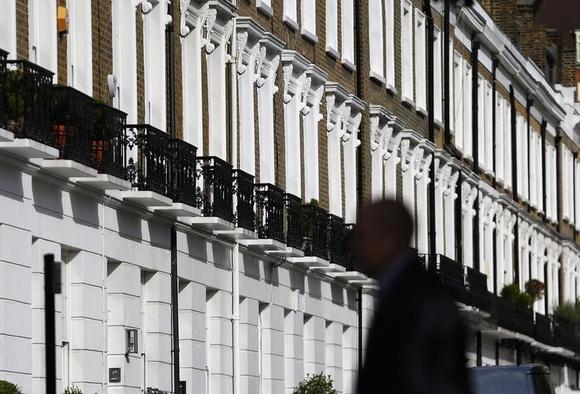 (Reuters) - The Bank of England will act soon to restrain Britain's booming housing market but prices are still set to rise nearly 8 percent this year as a dearth of supply and a government loan programme fuels inflation, a Reuters poll found.

That is not far off the 11 percent average pace seen in the year to April, which prompted BoE Deputy Governor Jon Cunliffe to say earlier this month that it would be "dangerous" to ignore the rapid rise in house prices.

A vast majority of around 30 property analysts polled in the past week said the British central bank's new Financial Policy Committee will use for the first time some of the sweeping powers it was granted a year ago to curb market excesses.

BoE Governor Mark Carney and the Monetary Policy Committee have been reluctant to raise benchmark interest rates from their current record low of 0.5 percent in case it chokes off a vigorous economic recovery.

Carney will face the challenge on Wednesday of explaining why the bank is signalling it is in no rush to lift borrowing costs even as growth picks up speed and house prices soar.

Instead, the FPC may force banks to hold more capital against certain types of mortgages, or urge caps on how large mortgages can be compared with a borrower's income.

"Financial, rather than monetary policy will be tightened first in an effort to slow down the UK housing market," said Phil Lachowycz at Fathom Financial Consulting. He still predicts a 17 percent rise this year - the highest in the Reuters survey.

A majority of those who expected the FPC would try to cool the market said it would do so when it next meets in June, as also predicted by a recent Reuters poll of economists. [BOE/INT]

Britain's housing market has made a swift recovery from a slump during the 2008-2009 financial crisis, when housebuilders' reluctance to build added to a supply shortage.

The government's "Help-to-Buy" mortgage guarantee scheme, launched a little over a year ago, has helped increase the pool of potential buyers and given the market a boost.

With national elections due next year, the ruling Conservative-led coalition may be reluctant to tamper with a scheme that has made many existing home owners happy by pushing up house prices and buoyed consumer confidence.

Home ownership has long been the bedrock of consumer wealth in Britain and the average asking price for a home reached a record high of 262,594 pounds last month, property website Rightmove said.

That is around 10 times the average salary, which unsurprisingly the poll indicated was too high.

It gave a consensus rating of 6.0 on a 10-point scale, where one is very undervalued and 10 is very overvalued. In London, the consensus was 9.0 - and six analysts said 10.

But despite fears of a housing bubble in the capital and expectations the central bank will act, none of the respondents had a fall in prices pencilled in over the next three years.

Instead, British house prices will rise nearly 8 percent this year, higher than predicted in a February poll, then 5 percent next year and another 4 percent in 2016.

"There is clearly lots of momentum behind the market and there are elements of a bubble in London," said Peter Dixon at Commerzbank.

The double-digit price rises seen in the capital will probably continue for year or two more, most respondents said.

Britain has more billionaires per head of population than any other country, according to the Sunday Times, most of them born abroad. These super-rich have been snapping up London's most exclusive addresses for eye-watering sums in recent years.