London housing crisis: who dares campaign for building on the greenbelt?

A London School of Economics professor argues that we should build homes on the capital's greenbelt, but London politicians prepared to back this view are few 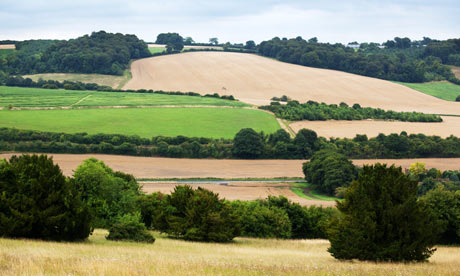 How green is the green belt? Photograph: David Levene

I liked Paul Cheshire's diagnosis of Britain's housing affordability crisis from the off:

When things go wrong it is always handy to blame foreigners and currently even the liberal press are blaming them for our crisis of housing affordability.

Aren't we just, especially where London is concerned? That, and complaining about the skyline while all over the city kids are sleeping on sofas because there aren't enough bedrooms in their homes. Drives me mad. Anyway, back to Professor Cheshire's argument:

The problem is not 50 luxury houses empty on London's Bishops Avenue or foreign speculators buying luxury flats to keep empty. It is that we have not been building enough houses for more than 30 years  and those we have been building have too often been in the wrong place or of the wrong type to meet demand.

Well, I wouldn't mind some sterner sanctions against the owners of plush London properties gathering dust. Neither would I object to fewer of them being built. But even if every home in the capital classified as unoccupied were filled with people tomorrow it wouldn't begin to fix our problem of insufficient supply of housing of the type needed most - homes that are genuinely affordable to Londoners and would-be Londoners on low and middle incomes. Cheshire argues that the essential problem is a longstanding crisis of housing supply caused by polices designed to constrain the supply of land. Result?

What policy is doing is turning houses and housing land into something like gold or artworks  into an asset for which there is an underlying consumption demand but which is in more or less fixed supply...The more tightly we control the supply of land and houses, the more housing and housing land become like investment assets. In turn, the stronger the incentives for their owners to treat them as an option to hold in the expectation of future price rises.

So to blame speculators for housing shortages and rising prices is simply incorrect. It is our post-war public policy that has converted a good that is in principle in quite elastic supply into a scarce and appreciating asset. We can see this from the behaviour of housing and land prices before we imposed our constraints on land supply in the mid-1950s. We can also see it from housing markets  such as Switzerland or Germany  where policy ensures adequate housing is supplied.

So, what would Cheshire do to put things right? He'd start by busting a few myths about the greenbelt, not least by demonstrating its lack of actual greenness compared with urban parks and gardens and its lack of value to people who aren't farmers, golfers, consumers of "horseyculture" or home owners within greenbelt areas. He writes:

The reality is that a child in Haringey gets no welfare from the fact that five miles away in Barnet, there are 2,380 hectares of greenbelt land; or in Havering another 6,010 hectares...What greenbelts really seem to be is a very British form of discriminatory zoning, keeping the urban unwashed out of the Home Counties - and of course helping to turn houses into investment assets instead of places to live.

So the solution to our crisis of housing affordability is not to blame speculators or foreign buyers but to sort ourselves out. We need to allow more land to be released for development while protecting our environmentally and amenity-rich areas more rigorously than we do at present.

Building on greenbelt land would only have to be very modest to provide more than enough land for housing for generations to come: there is enough greenbelt land just within the confines of Greater London  32,500 hectares  to build 1.6 million houses at average densities.

Yes, big questions about investment, regulation and tenure type would still need to be argued about. But are any politicians brave enough to make this sort of case? I can think of only one who's done it recently - David Lammy, Labour MP for Tottenham and a man who wouldn't mind becoming London's next mayor. Perhaps he should talk about the greenbelt a bit more.

Paul Cheshire is Professor Emeritus of Economic Geography at the London School of Economics and a researcher for its Spatial and Economics Research Centre. Read his article in full here. A previous article by him, specifically about "greenbelt myth", is here.