UK property prices have made us millionaires  but damaged democracy


One in 10 of UK adults is now a millionaire, thanks mostly to soaring house values. The main political parties can't help but cater to property owners, so who will represent the rest? 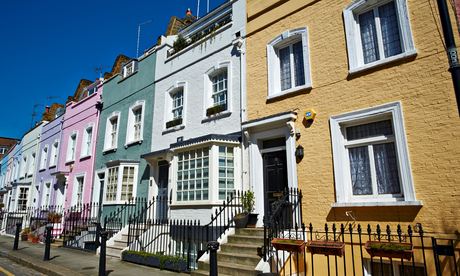 Both main parties are obliged to rail against the untouchably super-rich, make sad faces over the institutionally super-poor, and keep the owner-occupiers happy, writes Deborah Orr. Photograph: LH Images/Alamy

We all know that inequality has been increasing over recent decades, and that the gap between the richest and the poorest is so great that they may as well be living on different planets. The left tends to concentrate on emphasising the number of people who do not benefit from the country's burgeoning private wealth. What these new figures bring home is that lots of people have been benefiting, and to a substantial degree. If so many adults are worth £1m, what are the figures for adults worth half a million, or a quarter of a million? Since almost two-thirds of householders own their own home, the answer can only be: a lot.

It's important to bear in mind that these statistics are an already fading snapshot, one that tells us a great deal more about the recent past than it does about the near future. The fact that one in five graduates is a millionaire does not mean that if you have a degree you have a one in five chance of becoming a millionaire, any more than the fact that one in 10 adults is a millionaire means that if you are an adult you have a one in 10 chance of becoming one yourself. It just means that recent generations have done well out of the property boom, graduates particularly, which isn't surprising. A greater number now get degrees than got A-levels in the mid-20th century. It's hard to believe that 20% of those graduating now are set to be millionaires  especially, no doubt, for them. In reality, the parental assets young people inherit will have more bearing on their future financial health than their education will. So much for meritocracy.

As for the present, unfortunately, all this asset wealth just means property prices are so high that the number of owner-occupiers has been decreasing, for the first time in 100 years. Of those renting, the highest proportion since the 1960s rent from private landlords. Back then, the postwar slum clearance programme inspired a boom in social housing that helped to quell the notoriously exploitative behaviour of private landlords. It's amazing that it's all been ramped right up again in just 50 years.

But those calling for similar measures to be taken now have to bear one significant change in mind. Back then, half the population rented, with their income rather than their assets dictating the level of financial security they felt. At present, property ownership may be in decline. But only a third of the population now rent. And half of those are renting from the two-thirds who own.

What this means, politically, is that members of Thatcher's property-owning democracy outnumber everyone else by two to one. For many of us, the value of our assets is just as important to our concept of ourselves as financially secure as is the size of our incomes, if not more so, because for some time now, generally speaking, our houses have been earning more than we do. The total wealth in private hands in this country in the years from 2010-2012 was £9.5tn  more than six times the value of all goods and services produced in the country every year.

Any British political party that doesn't put the needs of property owners first risks alienating the majority. That's why Labour targets not the poor, but the "squeezed middle". It might be nice to believe that the last time Britain ousted the Conservatives, it was because we were appalled by the ravages of de-industrialisation and privatisation. But a lot of people  the "squeezed middle"  were probably just sick of high interest rates and declining property prices. Any party that presides over low interest rates and rising property prices will now achieve good poll ratings. No wonder politicians have, for decades now, been calling for a house-building boom to tackle the supply problem, while remaining privately relieved that it never really quite seems to take off.

And there's no point in blaming Thatcher, not entirely. In the decade since 1997, when the Blair government took power, house prices trebled, having already jumped in the 1980s. In one generation, house prices increased by 300% under Labour. The minute the property boom started to ebb, Gordon Brown was out and David Cameron was in. Sure, he didn't get a majority. He wouldn't now, either, as the polls stand.

But what is increasingly obvious to the population, if not to its politicians, is that, in Britain, an adversarial, first-past-the-post, two-party system is no longer representative of the needs of the nation. That's what the rise of the protest vote tells us more than anything else. The days when one party represented the workers and the other the bosses are over. Both main parties are obliged to rail against the untouchably super-rich, make sad faces over the institutionally super-poor, and keep the owner-occupiers happy. Property-owning democracy indeed.

It's all very well to declare that property prices in Britain  in parts of Britain anyway  are "unsustainable". Wise heads have been saying that for decades. Perhaps the thing to focus on now is that those who rent are in a vulnerable minority. This government has been trying to reduce the level of housing benefit, which is claimed by people who work as well as people who don't. It seems to me that it might be worthwhile to consider making money paid in rents tax-deductible, and to concentrate in other ways on creating a tax system that focuses on making life more easy for those on low incomes.

Ultimately though, what's most dangerous of all is political drift. Already, Ukip is rising on a tide of populism. Labour has chosen to represent the middle class  that was what new Labour was all about. It may talk about "learning the lessons of neglecting its heartlands", but the numbers don't add up. Its heartlands consist of a smaller number of poorer people. At the turn of the 20th century, when the Labour movement started its rise, only a quarter of the population were owner-occupiers and three quarters relied on income alone for their livelihood and security. Improved wages and conditions meant everything to most people. Now, the majority have a foot in both camps, tied to the fortunes of capital as well as the fortunes of labour.

The old "heartland" is comparatively small now, and deeply disadvantaged, not only economically but politically, too. For this deliberate and comprehensive societal exclusion, its denizens are blamed. I wonder how many years of hung parliaments  their texture changed only by the ebb and flow of property prices  it will take to create a party happy just to stand for those people, gaining enough seats not to win elections, but to be a force that represents their interest truthfully and eloquently, so they cannot be decently ignored. It's all that can be hoped for at the moment, and judging from the current political landscape, it looks like it will take many years. Our current system guards against a powerful third party, and the main achievement of the Lib Dems has been to remove electoral reform from the political agenda. It's sad that British democracy has been brought so low  and by bricks "worth" millions.