Asking house prices in London have risen by £80,000 since January 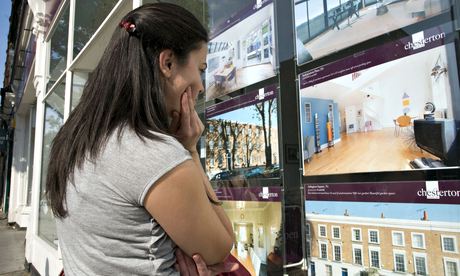 The average asking price for a London house has jumped £80,000 since the beginning of the year, according to figures from Righmove. Photograph: Alex Segre/Rex Features

The average asking price of a property in London has risen by £80,000 since the start of 2014, as sellers try to cash in on continuing demand from buyers, according to the property website Rightmove.

The figures follow comments over the weekend by the Bank of England governor, Mark Carney, that the property market poses a risk to economic recovery.

He warned of "deep, deep structural problems" in the UK market, and said the main problem was that not enough new homes were being built.

The strength of price rises in the capital has been driving fears of a bubble and calls for the Bank to step in to calm prices.

Rightmove said demand and asking prices were now rising across England and Wales, but the increases in London were distorting the national picture.

An increase in new sellers earlier in the year was reversed in May as the number of homes being newly put up for sale fell 1% compared with April. It was thought to be the result of the timing of bank holidays.

Rightmove's director, Miles Shipside, said:"London prices traditionally pick up earlier than the rest of the country, and while it appears to be slowly dragging other regions along in its wake, the difference is still very marked, particularly when the percentage increases are turned into hard cash comparisons.

"Indeed, outside London and its commuter belt, demand may be better balanced with supply by the more stringent checks and affordability tests under the mortgage market review (MMR) that became mandatory less than a month ago.

According to Rightmove, 10 out of 32 boroughs in London recorded annual asking price rises of more than 20%, with a 43% increase in Tower Hamlets, east London, driven by cash buyers and investors in Canary Wharf and neighbouring areas.

However, in some parts of London estate agents say prices are starting to plateau as affordability restraints kick in. Typically first-time buyers in London are taking on mortgages of 3.8 times their income to buy homes, versus 3.4 times nationally.

"Buyers, who after all make the market, have sort of called time on some prices being asked. They're not paying what's being asked," he said.

"Part of the reason for price rises is lack of stock which created something of a frenzy among agents looking for listings and pushing prices beyond what buyers will pay. When this happens there's usually a three month hiatus before sellers realise what's happening and adjust and that's what's happening now."