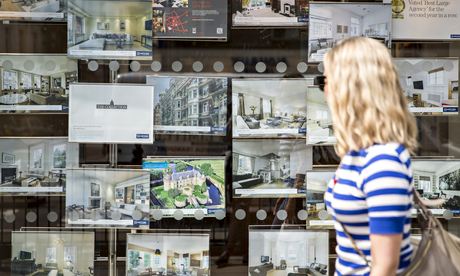 How much?!! A woman peruses an estate agent's window in Knightsbridge. London house prices are rising 17% year on year. Photograph: Rob Stothard/Getty Images

UK house prices slipped back in March but were still up 8% on a year ago while increases in London continued to lead the property market higher.

The Office for National Statistics said prices dropped 0.5% between February and March as the average mix-adjusted house price dropped by £1,000 to £252,000.

That figure helped annual house price inflation ease back from 9.2% in February, the highest since the summer of 2010.

The figures follow a warning at the weekend from the Bank of England governor, Mark Carney, that the booming housing market posed the biggest risk to Britain's economic recovery as a shortage of new homes drives up prices.

Responding to the official figures, Chancellor George Osborne's office said Carney and his colleagues were free to act to cool the housing market.

"As the chancellor has said, we need to remain vigilant about the housing market. The government has given the Bank of England the tools to do that and they should not hesitate to use those tools if they think it will help with economic stability," said a spokesman.

David Cameron told the BBC's Today programme on Tuesday that the Help to Buy scheme could be scaled back, but defended the programme, saying he maintained his commitment to home ownership.

Housing campaigners said that despite news of a slight drop in March, the overall picture of sharply rising house prices was leaving many people shut out of the market.

"These figures are yet more proof that our housing market is reaching boiling point," said Campbell Robb, chief executive of the charity Shelter.

"With every rise in house prices leaving more people priced out or stuck in cramped homes, rollercoaster house prices are rapidly losing their feelgood factor."

The ONS said house prices were increasing strongly across most parts of the UK, with prices in London again showing the highest growth at 17%, down from 17.8% inflation in February.

Howard Archer, economist at IHS Global Insight commented: "This does little to ease concern over the strength of house prices in the capital where talk of a bubble is already fully justified."

He added that the strength of house prices is not yet a major concern outside of London. The ONS said that excluding London and the south east, house prices increased by 4.7% over the year to March 2014.

House price inflation in the capital was followed by the east of England at 6.6% and the south-east at 6.1%. It was slowest in the north-west at 3.1%, Scotland at 0.8% and Northern Ireland at 0.3%, according to the ONS regional breakdown.

Prices paid by first-time buyers were 10% higher on average than in March 2013, the ONS said.

Economists have predicted that tougher mortgage application guidelines introduced last month could stem housing market activity in the short term but that prices will continue to rise strongly.

"Despite the recent dip in mortgage activity and the softer ONS price data for March, house prices still look more likely than not to see solid increases over the coming months," said Archer.

"Housing market activity is likely to be supported by substantially improved consumer confidence, markedly rising employment, improving earnings growth and extended low mortgage interest rates, and it is currently being fuelled by the Help to Buy initiatives."