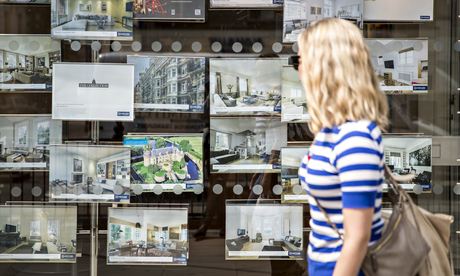 A woman walks past an estate agents in Knightsbridge: the average house price in the capital according to the ONS is £459,000. Photograph: Rob Stothard/Getty Images

Lloyds Banking Group, owner of the Halifax mortgage brand, is to cap applications for mortgages of more than £500,000 at no more than four times a borrower's salary. The average house price in London, according to the Office for National Statistics (ONS), is £459,000.

The move by the bank, partly owned by the taxpayer, came two days after the Bank of England governor, Mark Carney, had pinpointed large mortgages of up to five times income as a cause for concern that "could store up bigger problems for the future".

Lloyds made its announcement  which sparked speculation that rivals would follow suit  after fresh data from the ONS showed London property prices had rocketed by an average 17% over the past year.

Stephen Noakes, director of mortgages at Lloyds, said the decision to limit lending was to address specific inflationary pressures in the capital, where house prices are up 30% from their 2007 peak.

"This is largely driven by issues of supply which are particularly acute in London."

Carney's weekend warning about soaring house prices was his strongest yet. The governor said they posed the biggest risk to Britain's economic recovery and emphasised the "deep, deep structural problems" in the market as housing supply continues to lag far behind demand.

On Tuesday night the business secretary, Vince Cable, added to the mounting concern, reiterating his view that hundreds of thousands of new homes needed to be built to meet soaring demand, including on green belt land. "There is an enormous gap between what's needed, which is probably 300,000 houses a year, and what we're currently getting, which is 125,000-130,000. We are way short on the housing supply which is needed."

Cable's intervention came as David Cameron indicated he was ready to amend the government's flagship Help to Buy scheme if the Bank's governor recommended a change of approach to help cool the market.

The prime minister said he fully endorsed Carney's comments about the housing market , telling BBC Radio 4's Today programme: "We will consider any changes that are proposed by Mark Carney. But as [Carney ] has said this is a well-targeted scheme and it has helped tens of thousands of people to get on the housing ladder and have mortgages."

Statisticians said prices in London were again showing the highest growth, at 17%.