The housing market is a huge problem in Britain. Blame the government, not the banks 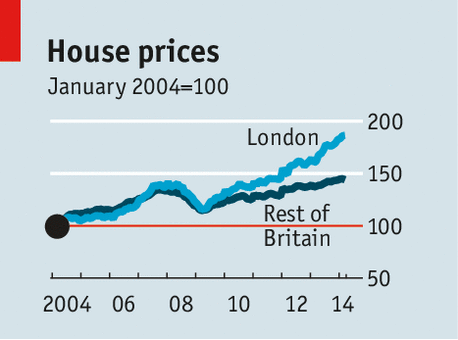 HAVING risen by 8% in the past year, British house prices are almost back to the double-digit pace that preceded the financial crisis. That parallel makes many anxious. Vince Cable, the business secretary, calls runaway house prices a real, real, real worry. Sir Jon Cunliffe, the central banker responsible for Britains financial stability, says housing is too dangerous to ignore. David Cameron, the prime minister, describes the rampant market as the biggest risk to Britains recovery.

The housing headache is made worse because different parts of the country are on completely different tracks. Much of Britain is calm, even tepid. In Scotland and Northern Ireland, house prices are up by less than 1% in a year, meaning real prices are going backwards. But the south-east is red hot: London is the core, with prices up 17% in a year. It gives policymakers a conundrum: can they tamp down the south without snuffing out the recovery elsewhere?

The big worry is not the house prices themselves: a house is an asset, after all. The problem is the debt that sits behind it. Britons are stretching to meet ever-rising prices by borrowing more. Average loan-to-income ratios have passed their 2007 peak. This threatens to throttle the economy. Interest-rate rises within a year are starting to look likely: with more pay devoted to mortgage repayments, consumption is bound to fall. That is bad news for firms, and, in turn, workers. A household-debt hangover also reduces the funds that could be channelled towards productive investment. This slows GDP now, and lowers potential too.

The boom runs on two types of fuel. The first is a rush of cash. Mortgage rates are low, and banks are keen to make loans on property. Money has also flooded in from abroad, as fancy flats are snapped up by foreigners whose governments are less friendly than Britains. French money underpins Knightsbridge; Belgravia-fancying Russians keep prices rising there.

The second problem is bigger: a long-standing mismatch between supply and demand. Since 2004 Britains working-age population has risen by nearly 4m, the number of homes by just 1.8m. New supply is stagnant despite high prices. Dream conditions for house-builders (debt is cheap, as are labourers) should be creating a building boom. Yet the puny 135,000 houses completed in 2012-13 was the lowest number since records began in 1969. In ten years the construction industry has shrunk by more than 12%.

The Bank of England needs to toughen up. George Osborne, the chancellor of the exchequer, has cannily lobbed the hot potato that is Help to Buy, a mortgage-subsidy scheme, to Mark Carney, the banks governor. Mr Carney should call time on it. And he should deploy his new macroprudential powers: the plan to stress test banks against a 35% house-price crash and a jump in unemployment is a good one. Lenders that cannot withstand this hypothetical shock will need to raise more capital, making them less eager to extend riskier housing loans.

Many British borrowers could do with a hard word from the governor, too. Mr Carney has new powers to stop Britons gorging on loans: debt blockers, such as loan-to-value or loan-to-income caps, would limit household leverage, and thus have most impact on over-borrowed London. Shifting the burden of tax from income to property would reduce the flood of foreign cash.

The biggest let-down has been the government. It has talked a good game about freeing up land for building in the south-east: weak construction figures show how little it has achieved. Mr Cameron should demand a faster planning process. Selling off unused government land would help builders and bring in revenue. Taxing land rather than buildings would encourage speculative construction and would push those sitting on large stocks to build or sell up. Building more around London will not be popular with shrub-loving Conservative voters, but it is the best way to stop another mortgage binge.