What do you think would slow the extraordinary property price boom? 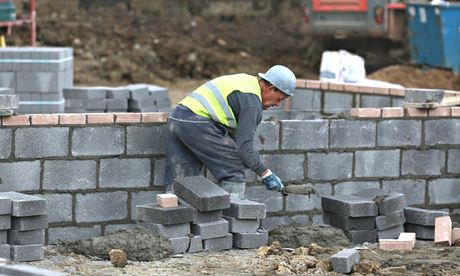 Building more homes could be part of the answer to run-away house prices. Photograph: Matt Cardy/Getty

Will we look back at the decision this week by Lloyds Bank (which controls the biggest lender, Halifax) to cap mortgages at four times salary for buyers wanting loans above £500,000 as the point when the house price bubble finally popped? The priced-out generation of adults in London and the south-east will be desperately hoping so  although the brakes will need to be applied rather more firmly to really bring prices under control.

What else can be done to avoid an almighty pile-up?

1. Cap income multiples at three times first income and one times second Pros: It was the standard cap until the early 1970s and kept prices in check. Forget all the huff and puff about Britain not building enough; the "value" of a house is principally a function of the amount a lender is willing to advance. Ireland built vast numbers of homes, yet also had an extraordinary price boom as banks lent recklessly. Capping lending withdraws the punchbowl from the party and we all sober up. Cons: It will kill the market in depressed areas, but do little to deflate London, where 40% of properties are bought with cash.

2. Limit mortgages to 25 years Pros: Stretched borrowers are now taking out 30, 35 and even 40-year duration mortgages. Both Halifax and Nationwide allow 40-year terms, and NatWest and Santander 35-year terms. Limiting borrowing to 25 years will stop first-time buyers over-bidding for properties. Cons: We're all living longer. Why not let borrowers repay over longer terms?

4. Regulate buy-to-let Pros: The mortgage market is like a four-lane highway: the three lanes occupied by conventional buyers are regulated (with the new affordability tests) while the other lane, reserved for landlords, can do whatever it likes  crucially they are allowed to take out cheap interest-only loans when these are banned for first-time buyers. Bring buy-to-let under the Financial Conduct Authority, and force landlords to meet the same tests as standard buyers. Cons: It will reduce the availability of rental properties.

6. Red-line hotspot areas Pros: Lenders could be ordered to halt or cut back lending volumes in high-stress areas such as London, Brighton and Cambridge. Some lenders do this informally already, while Alliance & Leicester in the early 1990s did so for London. It would allow demand to expand in areas such as the north-east, while pushing down demand in the frothiest markets. Cons: See point 1. Many buyers in hotspots are cash-only, so won't be affected. One side of the road could have mortgages available, but not the other.

7. Build more Pros As the Bank of England governor Mark Carney, pictured, is very aware, Britain has twice the population of his native Canada, but builds half the number of houses. Unlock supply constraints (planning, greenbelt etc) and prices will moderate. Cons: Listen to the likes of Simon Jenkins or Danny Dorling. It's what we do with our existing stock that matters.

8. Ban foreign purchases: Pros: Global capital is using London as a parking place for hot money, pricing out domestic residents. Cons: We already charge 15% stamp duty on foreigners buying a home through a company, and that hasn't stopped them.

I could go on  9. Reduce immigration and thus limit the demand for rental properties. 10. Junk Help to B uy. 11. Move more government jobs out of London. 12. Raise stamp duty.