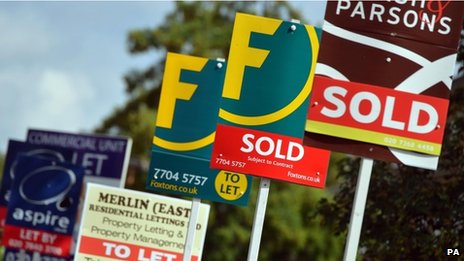 The mutual's chief executive, Graham Beale said there was already a "slowing down in the market place".

It comes as Nationwide reported its best ever year, with a four-fold rise in pre-tax annual profits to £677m, against £168m a year earlier.

"At some point buyers just start saying no," he added.

Nationwide said it increased mortgage lending by 31% to £28.1bn in the year to 4 April on the back of the recovery in the housing market.

The mutual said it had also approved 31% of all mortgages advanced within the government's Help to Buy scheme, designed to help first-time buyers onto the property ladder.

But it added the number of mortgages it advanced to borrowers with a deposit of 10% or less of a property's purchase value - which would account for a majority of first-time buyers - remained low, at 2.4% of its total lending for the year.

The most recent figures from the Office for National Statistics (ONS) showed average property values increased by 8% in the year to March to £252,000, down slightly from the 9.2% rise recorded a month earlier.

House prices in London rose 17% in the year to March, according to the ONS.

Ray Boulger, senior technical manager at mortgage brokers John Charcol, said the rate of increase in house prices in London was "clearly unsustainable" but added that it was "very difficult" to talk about the risk of a housing bubble outside of the capital.

He pointed out that house prices in many parts of the UK remained well below their 2007 peak.

"There are signs that the London market is topping out," he added. "By which I mean that the rate of increase in house prices is likely to slowdown.

"What we will see over the next year is the big difference in house prices in London and elsewhere will narrow considerably as prices elsewhere begin to pick up."

Mr Boulger forecast that house prices nationally would rise by 9% this year, adding that he expected the rise in property values in London to slowdown to about the same level.

State-backed Lloyds Banking Group recently announced it would restrict lending to four times a borrower's income for mortgage applications of £500,000 or more. There has been speculation that Royal Bank of Scotland may soon follow suit.

Nationwide also announced it had achieved the 3% leverage ratio - the difference between a bank or building society's total capital versus its loans and other debts - set by the Prudential Regulatory Authority (PRA), a year earlier than expected.

Last year, it missed the 3% target as it did not have sufficient capital and it was given until 2015 to increase its capital base and now has a leverage ratio of 3.3%.

Nationwide's position was strengthened by a £4.9bn increase in savers' deposits to £130.5bn, equal to a 12.1% share of the total savings market.

Mr Beale, said the mutual continued to offer "a clear and compelling alternative to the established banks".

New and existing customers opened more than 430,000 new current accounts, an 18% increase compared with a year before.

Nationwide said it had increased its overall market share of current account customers to 5.5 million accounts or 6.2% in February - the most recent figures available - up from 5.7% a year earlier, helped by new rules that make it quicker and easier for people to switch their current account to another provider.