Londoners flocking out of capital to exploit house price gap


Gap between property values inside and outside the M25 is at its highest level ever, at more than £200,000, according to research 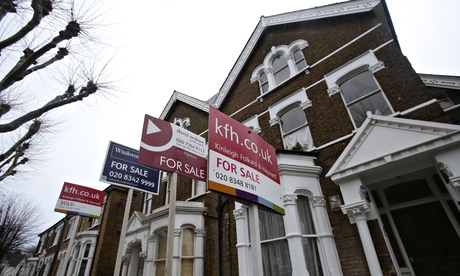 Londoners flocking out of capital to exploit house price gap

Houses for sale in Finsbury Park, north London: in some parts of the capital, annual price rises have topped 20%. Photograph: Yui Mok/PA

Soaring London house prices are prompting a growing number of homeowners to cash in and move out of the capital to parts of the country where they can exploit the price gap and buy a substantial family home for the price of a small flat in central London.

In the past 12 months, Londoners have bought 44,000 properties worth a total of £15bn outside the capital, according to research by property company Hamptons International  the highest level in terms of both volume and value since 2007. In the first four months of this year, 14,700 properties were bought for a total of almost £5bn.

In some parts of London, annual price rises have topped 20%, and although markets are picking up in other parts of the country, Hamptons said the gap between property values inside and outside the M25 was at its highest level ever, at more than £200,000.

Hamptons' research found that most Londoners were buying in commuter areas in the east and south-east of England. In the past year they accounted for 14% of all the properties sold in the east of the country and 11% in the south-east.

A three-bedroom family home in Guildford, an easy commute from London, can cost around £600,000, the same as a one-bedroom flat in Central London.

"The flow of families out of London, a natural part of any city's life cycle, has been suppressed over the downturn," said Johnny Morris, head of research at Hamptons International.

"It's a combination of this pent-up demand and the record difference in prices between London and the rest of the country that is driving in Londoners buying homes outside of the capital."

Buying agent Henry Pryor said he had seen a return to the days "when those living in London bought a subscription to Country Life and plotted a move down the M3 or the M4".

"You'd have to be seriously out of touch to be living in London and not to have realised that your home was now worth more than a Premiership footballer," he said. "The chasm in price between a home inside the M25 and one in the country is at last no longer growing but canny buyers are seeing this and far more inquiries I receive are now from people wanting to cash in on the seemingly ludicrous value of their shoebox of a home and snap up a slice of country living."

Recently estate agent Savills said it had seen a surge in the number of London buyers registering interest in properties in Scotland. For the price of a two-bedroom flat in some parts of the capital, it is possible to buy a 13th-century castle in Angus or an estate in 40 acres of private ground just outside Glasgow.

The Hamptons figures include Londoners who have decamped from the capital completely and those who have bought a second home beyond the M25.

Ed Mead, a director of estate agency Douglas & Gordon, said the recent pace of price rises was deterring some homeowners from selling up in case they missed out on more growth.

"If you sold a house off Clapham's Northcote Road in 2007 you would have got around £850,000-ish and perhaps bought your dream family home in commuter distance for around £750,000. Your Northcote Road house would now be worth £1.35m and your country house the same if not a bit less than you paid. For many who moved and had friends who stayed this has been a bitter pill to swallow.

"It does present those wanting to move with a dilemma, but I think with London prices plateauing it might be, on balance, a good time to do it."