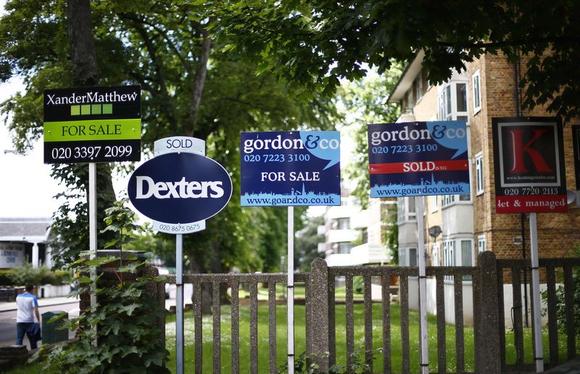 Estate agents boards are lined up outside houses in south London June 3, 2014.

(Reuters) - The gap between house prices and home-buyers' income in London and some other areas of England has widened sharply from before the financial crisis, according to official data likely to catch the eye of the Bank of England.

Average house prices in the capital were equivalent to more than five times the annual income of those taking out new mortgages in the first three months of 2014, the Office for National Statistics said, well above levels in late 2007.

The figures also suggest that buyers of larger homes who are unable to muster a big deposit are likely to fall foul of new lending limits introduced by two of Britain's biggest banks.

The BoE has said the housing market is the biggest risk to Britain's economic recovery and is primarily focused on the risks of a debt build-up rather than rising house prices. The Bank is expected to start raising interest rates in a year.

"Rapid house price growth, if not combined with stronger economic fundamentals including higher employment and incomes, might lead to rising levels of indebtedness and increase the number of households who are vulnerable to subsequent changes in interest rates," the ONS said in its June economic review.

Average house prices in London were 5.3 times the income of new mortgage-holders in the first quarter of 2014, up from 3.5 times in the last three months of 2007, before the financial crisis.

Southern and eastern England also had ratios near five and for Britain as a whole it was 4.4, up from 4.0 before the crisis, the ONS said.

In a sign of how the housing recovery has been slower in other parts of the country, the ratio of house prices to income remained lower than it was in late 2007 in seven regions.

BoE officials have sounded increasingly concerned about the housing market, but say they will use mortgage controls or other measures before raising interest rates to tackle risky lending. They are expected to agree on new measures possibly as soon as the next meeting of the Financial Policy Committee on June 17.

Some of the steam may already have been taken out of the market by new controls on lenders that took effect in April.

On top of that, Lloyds Banking Group and Royal Bank of Scotland both said recently that for loans over 500,000 pounds, they will no longer give mortgages of more than four times a borrower's income.

Both banks have played down the impact of the change saying it would affect just 8 percent and 2.6 percent of their respective lending in London.

But given the average London home costs more than 435,000 pounds after a 17 percent jump in prices over the past year, Lloyds' and RBS's decision could affect more home-buyers than their figures suggest, especially if other lenders follow suit or the change is applied to lower-value mortgages.