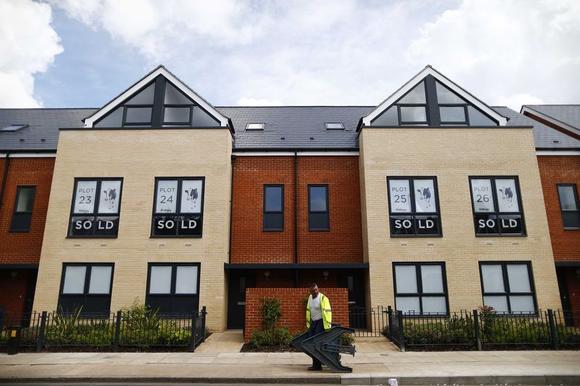 Sold new build homes are seen on a development in south London June 3, 2014.

(Reuters) - British house prices had their biggest monthly jump in more than 11 years in May, figures from mortgage lender Halifax showed on Thursday, putting further pressure on the Bank of England to guard against risky lending.

House prices leapt by 3.9 percent, their biggest one-month rise since October 2002 and far outstripping forecasts of a rise of 0.7 percent after two months of falls.

The news came shortly before the Bank of England held benchmark interest rates at a record low 0.5 percent, and contrasts with recent figures showing a falling number of mortgage approvals, which typically heralds slower price increases.

While the central bank has, for now, ruled out raising rates to curb rising house prices, its Financial Policy Committee is widely expected to recommend a further tightening in mortgage lending standards after it meets later this month.

"Expectations of house price gains are still elevated, and the FPC should act to prevent any further loosening of mortgage terms," said Matthew Pointon, property economist at consultancy Capital Economics.

Halifax said house prices in the three months to May were 8.7 percent higher than a year earlier, matching March's rate of growth, which was the fastest since September 2007, though less than the 11.1 percent rise reported by rival lender Nationwide.

It also noted that the number of home sales was falling, and that this was making monthly price changes more volatile.

Over the three months to May, prices were 2.0 percent higher, in line with the trend that has been in place since June last year.

However, weak wage growth and a revival in private-sector housebuilding - which was up by a third in the year to March - might temper price rises in the longer term, Noakes said.

Data on Wednesday showed that the average person taking out a mortgage was buying a house worth more than four times his or her annual earnings.

The BoE's Financial Policy Committee holds a quarterly meeting later this month, and economists say it could recommend other lenders adopt similar measures or hold more capital against high loan-to-value and loan-to-income mortgages.