The shoebox flat is our housing crisis in microcosm

Our homes are shrinking in size and rising in cost, while a lack of supply means we can't even choose where and how we live 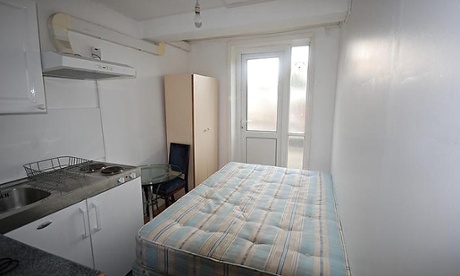 A flat in London has captured the headlines. The "studio" in question is minuscule, its rent £170 a week, and it was snapped up within 16 hours of being advertised. In it a bed seems to jut out from the kitchen units like an oversized ironing board, a naked bulb hangs over a tiny table with one chair, and the only practical way to browse the narrow wardrobe appears to be standing on the bed. It hardly deserves the name apartment  unless one goes back to its original etymological meaning of "a separated place".

The significance of the story is more symbolic than actual. It marks the culmination of four decades of irrational housing policy, increasing urbanisation, woefully inadequate building programmes, uncontrolled rent inflation, and the divestment of social housing stock. It marks  especially seen in conjunction with a flat at One Hyde Park selling for £140m last month  the denouement of Britain's housing crisis and its re-emergence as a class issue.

The reality behind the individual story may be much more complex, of course. Little is revealed about the personal circumstances of the tenant. For all we know this tiny pod could be the environmentally conscious selection of a fashionable urbanite seeking to reduce their carbon footprint, or the thoughtless impulse of a student who only plans to use it as a base and occasional "crash-pad", or even the clandestine choice of a relatively well-off unfaithful spouse who works nearby.

However, the general trends emerging from the data are undeniable: our homes are shrinking  they are on average nearly half the size that they were in 1920s; prices, especially in the south-east, continue to soar while mortgage lending requirements are tightened; all of which makes buying a property unaffordable for the vast majority of first-time buyers. The rise in the cost of renting in England and Wales has consistently outstripped inflation, which in turn has consistently outstripped wage growth, creating an unprecedented squeeze on low- and middle-income households. Half of all rural land and more than a third of all land in the UK is owned by a tiny 0.6% of the population. 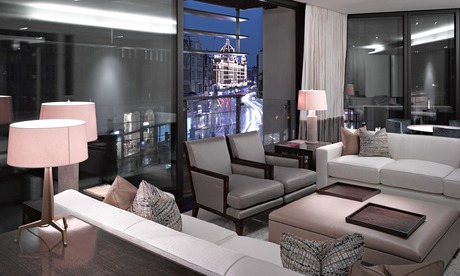 At One Hyde Park, flats have sold for up to £140m. Photograph: View Pictures/Rex

Even those trends, of course, are not without complicating factors. Data tends to be disproportionately skewed by the property market in the south-east, and the debate is consequently London-centric. A growing number of Londoners are taking advantage of that price differential and moving outside the M25. London men in their 40s spend on average 84 minutes of every day commuting  a factor which might make the small central flat a much more attractive prospect. We work increasing numbers of hours and lead an increasingly sedentary lifestyle  more than 14 hours a day are spent sitting down. Add sleep into the mix and perhaps house size becomes less important.

With our increasing presence in different social media platforms, online gaming communities and the ability to roam unlimited virtual space for information or entertainment, our requirements of private space may be changing. One's Facebook wall is possibly a more vital personal space than the wall made of bricks and mortar above their monitor; superfast broadband is a more key requirement than a spare room.

Environmental factors mean we simply must try to limit the amount of space we take up, heat, light and consume. If this is the case, we should stop obsessively focusing on house size as the only factor which affects our quality of life. In urban areas, taking action to reduce light and sound pollution, ensuring there are plentiful green public spaces, free exercise programmes and the availability of fresh produce at low prices are just as crucial. In rural areas, the improvement of internet speed and availability, and the efficacy and price of transport are key.

The only statistics which are entirely indefensible, and the absolute crux of the issue, are those of the increasing number of people who are homeless, living in shelters or temporary accommodation. The facile answer to this national shame is, of course, less immigration, suggesting it could solve the housing crisis through a declining population. Yet a declining population brings with it a lack of growth and economic activity, reduced revenues and an increasing pension deficit. All this would inevitably result in is less, not more, housing.

The only answer to the lack of housing is building, utilising and converting more of it, and ensuring its fair distribution by making it affordable. Individual preference may reasonably lead one to a shoebox flat; lack of any alternatives shouldn't.